The 34,000 sq ft (3,000 sq m) High-Performance Computing Data Center Globe (HPCDC Globe) includes a 100 ft steel sphere as part of its design. It is part of a six-building project and will house the company’s manufacturing subsidiary, Foxconn Industrial Internet (Fii).

“Exciting day at Foxconn FII as they open the data center Globe.” Bryan Albrecht, President of Wisconsin’s Gateway Technical College, tweeted this week, also including a picture of an opening ceremony in front of the facility. The steel frame of the globe had been installed in September 2020.

The company completed the steel globe frame in September 2020 before beginning the process of installing 642 windows. Foxconn is yet to make an announcement about the status of the facility, and the last update on the Racine County site in March said the facility was about to undergo mechanical startup and testing. DCD has reached out to Foxconn for more information. 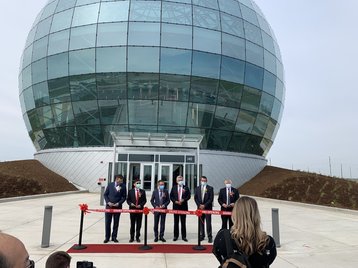 The structure is part of Wisconn Valley Science and Technology Park (WVSTP). Hailed as “the eighth wonder of the world” by then-President Trump, Foxconn was due to invest $10 billion in a display panel manufacturing plant, creating more than 10,000 jobs in exchanges for billion in subsidies.

After delays, Foxconn backtracked on its plans to make LCDs on the site, saying instead it would focus on hiring researchers and engineers. It then announced plans to make respirators on the site during the height of the Covid-19 pandemic in partnership with Medtronic, before beginning to manufacture servers for Google as well as networking gear for Cisco. Earlier this year, the company signed an agreement with Fisker to build electric vehicles on the plant.

“The last deal didn’t work for Wisconsin, and that doesn’t work for me,” Gov. Tony Evers said. “Today I’m delivering on that promise with an agreement that treats Foxconn like any other business and will save taxpayers $2.77 billion, protect the hundreds of millions of dollars in infrastructure investments the state and local communities have already made, and ensure there’s accountability for creating the jobs promised.”

Foxconn said in a statement that the new deal gave it “flexibility to pursue business opportunities in response to changing global market conditions.”