All the data at Kano center was backed up, official says

A fire has destroyed IT equipment belonging to the Independent National Electoral Commission (INEC) of Nigeria.

The fire took place at the data processing center of the INEC office in Kano early on Tuesday morning, destroying a building that housed servers, laptops, and other equipment. An official said it may have started in an air conditioning system, but the center's data was all backed up. 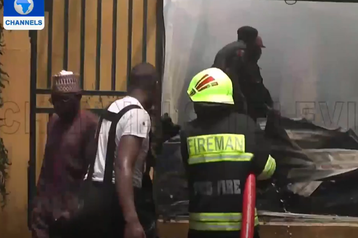 "It is difficult to say what has caused the fire right now, but we suspect it must have started from an air conditioner," Professor Riskuwa Shehu, resident electoral commissioner for Kano State, told Channels TV. "Unfortunately, we couldn't get the fire service in time, but we were able to at least stop it at this building."

The data processing center held IT equipment, "but not the card readers, mostly our servers," said Shehu. He assured reporters that INEC has backups for the data held at the Kano site. "We are going to meet now, write a comprehensive report to investigate the actual cause and see what measures need to be taken against a future occurrence of this."

The fire was reported at 10.15 according to an INEC announcement: "The staff made spirited efforts to bring the fire under control using fire extinguishers, but they were overwhelmed until the arrival of officers of the Federal Fire Service, who subsequently quenched the fire."

All data is backed up offsite and is therefore safe, and will be recovered swiftly said the announcement.

Witnesses told NewswireNGR that the fire followed fluctuations in power voltage, which "blew up some air conditioners."