They tried to hide that they were behind it

The data center, located in western Licking County on a 345-acre site east of Beech Road and south of Route 161, was expected to open in 2022. Building work is still ongoing, with the social media and advertising company hoping to eventually have five facilities on the campus.

According to a statement on the site's Facebook page, the data center campus is already serving traffic and is part of the company's global infrastructure. The announcement also says the company is building two more structures on the site making it a 2.5m sq ft (230,000 sq m) campus. The campus represents an investment of around $1bn, and 150 jobs will purportedly be created.

To show off the site, Facebook held tours for local media (ABC 6) and local officials on Thursday (February 6). 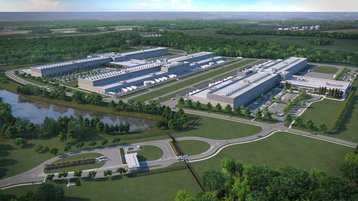 Aww... so nice and green

Ohio Governor Mike DeWine said: “I forward to many great days ahead and looking forward to more construction and more jobs coming.”

New Albany Mayor Sloan Spaulding said: “Only two years ago we were announcing this location and today we are celebrating its grand opening and that is remarkably fast.”

“We ask ourselves how much energy does it take to support one Facebook user for an entire year. It’s about the same amount of energy it takes to make a cup of coffee."

Sorry to burst the bubble

Aside from generous grants and friendly tours, Facebook is the beneficiary of a whole slew of tax credits.

DCD reported on the news in August 2017, back then the Ohio Tax Credit Authority approved roughly $37.1m in state tax incentives for a 900,000 sq ft (83,613 sq m) project known only as Sidecat - at the time Facebook tried to hide its identity.

Facebook has a history of trying to hide the fact that it is behind a data center project for as long as it is feasible. When the social network was considering either Utah or New Mexico as the location for its next data center, it operated through a company called Greater Kudu LLC.

Greater Kudu only existed for that one project and was involved in covert lobbying over tax breaks long before its true identity was revealed.