The results of taxation, or rather, the lack of it

Facebook will expand its upcoming facility in Cedar Valley, Utah, by around 50 percent.

Since the company broke ground in May 2018, Facebook has poured 41,000 cubic yards of concrete and laid more than 7,000 tons of steel.

During its construction, Facebook pumped more than $1 billion into the data center at Sweetwater Industrial Park in the city of Eagle Mountain, an increase over the $750m the company initially intended. The expansion along with the rest of the data center is expected to be done by 2020. 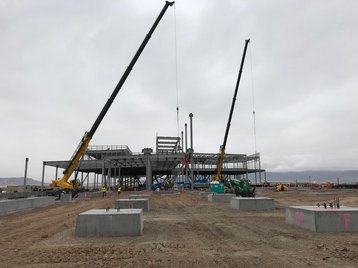 The company held its plans close to its chest while negotiating with state authorities and local officials.

As part of the deal with locals in 2018, Facebook agreed to spend at least $100 million on Eagle Mountain’s infrastructure to accommodate the facility.

The social media company also signed PPAs for 450MW of solar energy in the hopes that the new data center will be 100 percent renewable.

DCD initially reported on Facebook's secret negotiations when it trawled through planning permission documents submitted to the local county’s Alpine School Board and to the State of Utah. The company's identity was discovered due to several infrastructure elements strongly resembling those used in the company’s other US facilities.

Utah has been eying up Facebook's centers with envy for some time. In 2016, it botched an attempt to secure a $250m project by Facebook before losing out to New Mexico.

The Beehive State offered the social media and advertising company tax breaks and property tax abatements, but the offer was seen as too generous because of the typically low returns of data centers. Ultimately, Facebook's project would be set up in Los Lunas, New Mexico through a company named Greater Kudu LLC.

In the months that followed, new levy exemptions for data centers were introduced. For Eagle Mountain, Facebook requested $150m in tax subsidies to offset the cost of building infrastructure, as well as a 20-year personal property exemption estimated at $375m, and an additional $375m tax break on the value of the real estate.