Google has opened its new multi-million-dollar data center in Montgomery County, Tennessee, and will source its power from several solar farms.

The $600m Clarksville site was opened by Governor Bill Lee at a ribbon-cutting ceremony on November 6.

“We welcome Google to Clarksville and are thrilled with the growing technology sector right here in Tennessee," Lee said. "Our highly skilled workforce and Google’s reputation for innovation will be transformational for this area and beyond."

Since setting up the data center in the state, Google has given more than $450,000 to local non-profits and schools. Enoch Moeller, Google data center site lead, said: “While this project is a part of a larger nationwide network of data centers, Google has worked hard to make a strong local impact.

"We are grateful to Clarksville and Montgomery County for welcoming us into this great community, and that is why we have made a concentrated effort to give back." 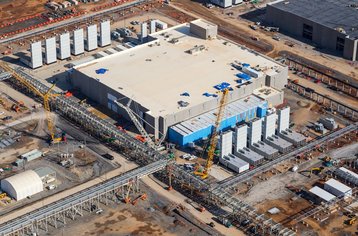 The Tennessee facility under construction – Google

Google started the project in February 2018, along with new facilities across the US as part of a wider global expansion. Jobs are already being advertised for the Clarksville site, with a data center facilities technician position posted on job site Indeed.

You are my only sunshine

In January, DCD reported on a 413MW PPA with the Tennessee Valley Authority (TVA) to source energy from 1.6 million solar panels.

The renewable energy is expected to be used in the new Google data center and in Jackson County, Alabama where another facility is under construction.

Two of the solar farms, located in Hollywood, Alabama, and Yum Yum, Tennessee, will each produce around 150MW. Google has also purchased the output of several new solar farms as part of the deal with the (TVA), totaling 413MW.

"Deploying solar farms does more than provide a cost-effective way to procure clean power," Amanda Corio, senior lead for energy and infrastructure at Google, said in a blog post. "It will also create economic benefits for Tennessee and northern Alabama.

"TVA’s developer partners - NextEra Energy Resources and Invenergy - will hire hundreds of workers in the region, make long-term lease payments to property owners, and generate millions of dollars in economic activity and tax revenue for the broader community."