European data centers have at last entered a period of growth, according to new research from DatacenterDynamics Intelligence (DCDi).

Data center investments went up by 11 percent in the last quarter of 2014, with strong growth in IaaS and PaaS cloud platforms, according to advanced figures from DCD Intelligence’s  Q4 EU Data Quarterly IT Tracker. The full report, produced by analyst Martin Hingley, associate analyst at DCD Intelligence, analyzes the different components of the European data center market by country and by vendor - a preview of the figures is available in two blog posts. 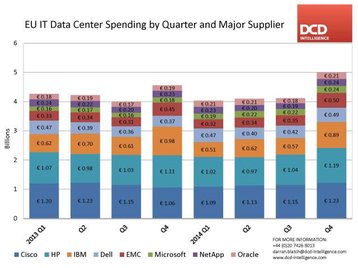 The total data center market was worth €48.8bn in 2014, and overall IT spending was up by 11 percent. Within that, some parts of the industry grew much faster, with IaaS and PaaS services growing at 28 percent. Infastructure software grew at 12 percent, which was perhaps a more impressive achievement, given that it already represents 39 percent of overall data center spending in Europe.

The breakdown by country was also interesting, with the UK, France and Germany leading the way. With 23 percent of the European spend, the UK was top country, but it only had a one percent lead over Germany (on 22 percent), which must be a precarious one, since Germany’s market is being strongly driven by the perception that the national laws on privacy are stronger there. 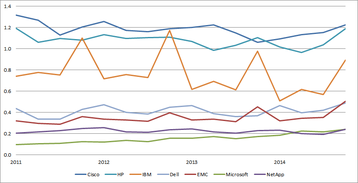 France, with 17 percent of the European spend, was the other country to stand out from the rest.

There were intriguing differences between the countries, suggesting that different nationalities are building slightly different data centeres. This could be due to reporting issues, or else represent a difference in maturity between the different markets. France  appeards to buy proportionally more servers, for instance.

Cisco has been the revenue leader in this market for some time, and was top in Q4 2014 with a 9.4 percent market share on revenues of €4.6 billion.

Cisco’s position is supported by its leadership in networking, as well as solid performance from its UCS converged systems. However, the rise of SDN (software defined networking) may be starting to bite, as its share fell from 10 percent in 2013.

The other established leaders, HP and IBM both declined. HP (on €4.2bn) went down from 9.1 percent to 8.6 percent, although it grew quarter by quarter through the year, perhaps reflecting increased confidence in its restructure. Overall,

IBM had the biggest fall: its €2.6bn revenue gave it only 5.3 percent of the market, down form 6.3 percent the year before.

Further down the rankings, Dell - having left the stock market - increased its share to 3.6 percent, and IBM also grew.

HP has been the only vendor to overtake Cisco - briefily in Q3 2013. IBM’s sales are noticably more seasonal, with peaks in Q4 of each year, which enabled it to take second place from HP twice, in 2012 and 2013.

Full results from the EU Data Center Quarterly IT and Cloud Tracker Q4 2014 will be available in April. For further details email [email protected]