EMBL-EBI takes 1.5MW for genomic sequencing and other bioinformatics work

The European Bioinformatics Institute (EMBL-EBI) has signed up for 1.5MW of data center capacity at Kao Data, the science-focused campus being built in North London.

Cambridge-based EMBL-EBI has taken the substantial chunk of capacity at Kao Data One, the first of four 8.8MW data centers scheduled to be built in the Kao campus, within the Harlow Enterprise Zone, close to the M11 motorway between London and Cambridge. 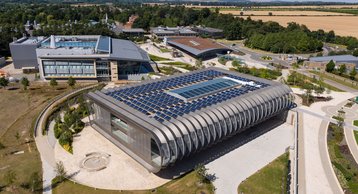 EMBL-EBI already holds some 270 petabytes of biological data, and its job is to make available to the scientific community, along with tools and training for researchers to carry out work in bioinformatics, including genomic sequencing, to assist in medical advances. Part of the European Molecular Biology Laboratory (EMBL), EMBL-EBI itself is based in the Wellcome Genome Campus in Hinxton, Cambridge, UK.

Launched in 2015, Kao Data is a large campus that wants to be "the leading provider of compute capability to the UK’s Life Science community" located on the so-called "technology corridor" between London, Stansted, and Cambridge. It opened in 2018 and promises to have around 150,000 sq ft (14,000 sq m) of white space, and a total of 35MW of power, much of which is earmarked for wholesale colocation customers.

Kao Data One is the first of four projected 8.8MW data centers. Kao plans to sell capacity either a whole building at a time, or 2.2MW suites (a quarter of a building), or else in smaller quantities called "cells" or "pods". EMBL-EBI has taken space in six cells in the first technology suite TS01 of the Kao Data One building. Each cell consists of 34 racks, ranged along a contained hot aisle, which can each consume up to 20kW, with an average of 10kW.

The Institute took space in Kao Data so its data center engineers could have easy access to the equipment, saving on operational expenditure. EMBL-EBI's data storage demands are growing daily, and it could scale quickly into TS02 if required in the future, according to the release.

“The biological data we store and share through our data resources are used by life science researchers all over the world to power new discoveries,” said Steven Newhouse, head of technical services, EMBL-EBI. “As such, data center space, physical security and infrastructure availability were critical in our decision-making."

Kao Park has a low carbon footprint and a commitment to use 100 percent renewable energy sources.

Update: Kao has changed CEOs. Jan Daan Luycks is relocating to his home in the Netherlands, and COO Paul Finch will step up as interim CEO.