Malaysia's joint-5G network will be supplied by Ericsson's new generation radio equipment, with the vendor to provide its new antenna-integrated radio AIR 3268. 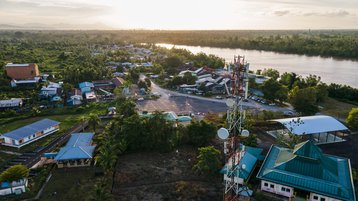 DNB will be the first company in Asia to deploy this new radio, notes Ericsson, which it claims to be 18 percent more energy-efficient than the previous generation.

This new radio will support Massive MIMO architecture, and uplink booster capabilities, and will be more energy-efficient when using 5G over mid-band frequencies.

"The AIR 3268’s improved energy efficiency will reduce the cost of operations and impact on the environment," said Ericsson head of Malaysia, Sri Lanka, and Bangladesh David Hägerbro.

"The new generation radios that will be deployed throughout Malaysia by Digital Nasional Berhad will be comparatively more energy efficient, thereby ensuring a more sustainable and responsible 5G rollout."

Ericsson claims that the radio is the lightest and smallest Massive MIMO radio in the industry, at 12kg and 23 liters.

The DNB was set up last year by the Malaysian government to speed up the deployment of 5G services across the country.

The new company has sought to partner with all six of the main operators in the country -- Maxis, U Mobile, Telekom Malaysia, YTL Communications, Celcom Axiata, and DiGi --and all take equity stakes in a state-controlled 5G single wholesale network run by the DNB.

All six of the operators agreed to the proposals last month, after being offered a combined 70 percent stake in DNB, dependent on all six operators agreeing to the terms.

However Maxis and U Mobile pulled out at the last minute, as neither saw benefits to the agreement, although both 'want to remain in talks for access to DNB's 5G network'.

Operators have been skeptical of the proposals put forward by the DNB, with many initially reluctant to agree to the plans, but the DNB has insisted its 5G strategy will keep costs lower and speed up the deployment of 5G services in the country, which has faced regular delays.

The DNB says the rollout will cost RM16.5 billion ($3.7bn) for the next decade, with Ericsson selected as the network equipment provider.

DiGi and Celcom to merge?

Two of the six Malaysian operators that agreed to the initial 5G terms by the DNB are reportedly closing on a merger.

Developing Telecoms reports that DiGi, which is owned by Norwegian-based Telenor, and Celcom have received regulatory approval from the Securities Commission Malaysia over a proposed deal.

The two telcos are the second, and third biggest in the country, and want to compete against Maxis, the country's number one mobile network operator.

Telenor noted in a stock exchange update that the merger is dependent on approval from Bursa Malaysia, plus shareholders of Axiata, and DiGi.

Telenor expects the merger to be finalized by the end of this year.