Equinix has set up a joint venture with Singapore investor GIC to build and operate hyperscale data centers in Japan. In October 2019, the pair signed a similar deal to build large facilities in Europe. Similar deals may be in the pipeline, but not necessarily with the same partner.

The pair will invest more than $1 billion in cash and assets, to develop 138MW of capacity in three 'xScale' data centers, two in Tokyo and one in Osaka. GIC is investing money and will own 80 percent of the joint venture's assets. Equinix is transferring two facilities which are under construction - TY12 in Tokyo, and OS2 in Osaka - along with land and development rights to build another site in Tokyo. 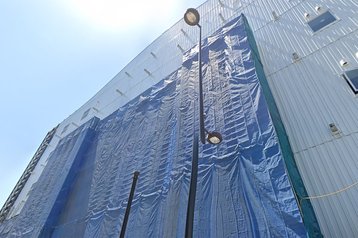 Equinix's TY11 site in Tokyo, under construction in May 2019 – Google Street View

"Over the years, Equinix has worked closely with [large cloud providers] to support their interconnection and edge requirements in our International Business Exchange (IBX) data centers," said Jeremy Deutsch, president Asia Pacific at Equinix. "These same cloud firms are evolving their platforms and are asking for larger deployments in certain markets - this is why we launched our second hyperscale initiative today."

Equinix owns the most colocation data centers in the world, but has historically not had much of a presence in the rapidly expanding wholesale hyperscale sector. Giant cloud players like Alibaba Cloud, Amazon Web Services, Google Cloud, IBM Cloud, Microsoft Azure, and Oracle have placed significant amounts of equipment in Equinix facilities of on-ramps and access to customers, but have kept their core infrastructure in their own sites.

This joint venture is intended to provide facilities for a list of around 12 global hyperscale giants, but the company says it does not aspire to enter the general wholesale market for data centers. Instead, it will "focus on a targeted group of hyperscale customers that offer significant value to the cloud ecosystem currently at Equinix," according to the announcement.

Speaking to DCD about the announcement Equinix's president Americas, Jon Lin, said that hyperscale is "a valuable adjunct area," rather than a major shift in direction from its core business, which is serving the enterprise and internconnection markets. Hyperscale is a big sector, which has lower margins than Equinix's home turf, he said. "Our customers say they want us to solve this for them. That’s why we looked for a capital partner to work with."

The venture will sell core capacity to hyperscale customers, built to the demanding price and deadline requirements of the giants, that will be closely linked to the Equinix facilities where they already have access points.

"Equinix is the world’s largest provider of cloud access with over 40 percent of major cloud on-ramps in the markets where we operate, and we further added 15 cloud on-ramps in 2019," said Deutsch. "We are seeing continued momentum with hyperscalers as they generate over US$500 million in annual revenue in our traditional retail business as reported in our 2019 Q4 earnings."

The Japanese joint venture with GIC follows the same model as the European partnership the two set up, which assumed control of Equinix's LD10 in London and PA8 in Paris, along with four more xScale sites to be built in Amsterdam, Frankfurt, and London.

There are actually some differencese between the two deal, however. According to Lin the European deal included some sites which were already operational and partly populated, but the Japanese deal only involves sites which are planned: "In Japan construction projects are complicated We had been planning these for use with hyperscale customers, and we started them with the idea that we might find a partner. We are keeping flexibility in the designs so, as we approach the hyperscalers we can adjust to their needs."

At the launch of the European JV, Equinix CEO Charles Meyers predicted similar deals would follow: "We look forward to launching similar JVs in other operating regions."

Last month, Yee May Leong, managing director of South Asia at Equinix, hinted at the Japanese deal even more directly, telling DCD Equinix “will be announcing something” in Asia with a partner on the hyperscale front.

This time Lin predicted more deals would come, but interestingly hinted they might not necessarily all be with the same partner.

"Broadly speaking we will see other deals," he told us. "xScale is a global opportunity. We are identifying and working with capital partners, for things with benefits to both us and our partners."

Asked about the use of the term "partners" he responded that Equinix was in touch with multiple possible investors: "We have had interest from a lot of different partners."

Japan is the world's third-largest economy and a major data center hub in the Asia Pacific Region.

The joint venture is expected to close in H2 2020, pending regulatory approval and other closing conditions. TY12 is expected to be completed by the end of 2020.