It beats having to build your own data center

Customers in cities ranging from, Dubai, Frankfurt, Hong Kong, Jakarta, and Dallas, will now have better Cloud access to the Chinese company.

They grow so quick

Alibaba has been growing its international reach via its relationship with Equinix ever since 2015 when it was still called Aliyun Cloud. The duo first linked up Hong Kong and Silicon Valley with the interconnection company's International Business Exchange (IBX) but this eventually grew to more and more metros. 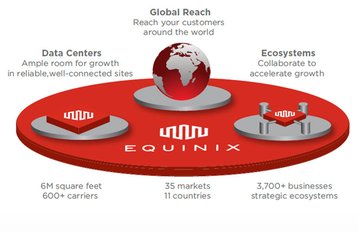 This deal between Alibaba and Equinix is a cheaper and quicker way to establish Cloud Regions without the costly process of building data centers.

Shunmin Zhu, the principal engineer for Alibaba Cloud, said: "Equinix's global platform and ever-expanding footprint has made it easy for Alibaba Cloud to grow into new markets and offer our customers access to a rich ecosystem of cloud service providers via Platform Equinix and Equinix Cloud Exchange Fabric."

Royce Thomas, senior VP of Global Account Management at Equinix, said: "We are glad to deepen our collaboration with Alibaba Cloud in new metros around the world. In today's digital economy, delivering cloud computing has become a top priority for enterprises. With this extended reach, we will continue to partner with Alibaba Cloud and support more enterprises to accelerate their digital journey across the globe."

This news follows Alibaba's efforts to heavily expand its cloud platform. In June, Alibaba announced it was recruiting 5,000 people globally with the new hires focused on networks, databases, servers, chips, and AI. This comes after promisingi to investment 200bn yuan ($28.2bn) in its cloud infrastructure over the next three years.

Alibaba also plans to open its third data center in Indonesia next year. By the time the facility opens, the company claims it will have 64 availability zones across 21 regions worldwide,