The company has been granted planning permission by Fingal County Council build two data center buildings on 13.3 hectares of land adjacent to the Huntstown Power Station to the south of the city. The company is to invest around €87 million ($93m) in the project. 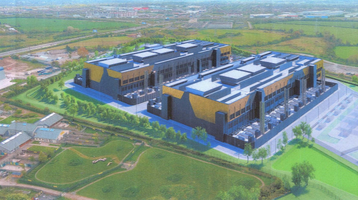 The three-story structures, known as Buildings A and B, would have a gross floor area of c. 37,647 sqm (400,000 sq ft) each. The site is currently largely greenfield and used for agricultural land; the company is to demolish two residential dwellings as part of the development.

The company filed for planning permission in November 2021. Local press notes that the Commission for Regulation of Utilities (CRU) declined to comment on the proposal when asked by the council.

Not Here Not Anywhere, a group campaigning to end fossil fuel exploration, opposed the development, saying the proposal ‘features both gas engines and diesel generators and fuel tanks, which will result in fossil fuels being used to both power the data center and act as a back-up energy source’.

Huntstown Power Company Limited is part of Irish energy firm Energia Group, and the Huntstown Power Station is a 742MW gas-fired power plant in County Dublin. The plant can provide up to 20 percent of Ireland’s total energy needs. Energia is also developing a biogas plant on the site.

According to filings, the company has been in discussions with the council about the development since 2020, but has since scaled back the design from three buildings to two based on feedback. Reports that Energia was considering data center development surfaced in February last year; according to its annual 2020 report, the company has a 100 percent stake in Energia Data Centre Limited.

However, Energia says the data center will be carbon neutral, and has already received a connection offer from Eirgrid, avoiding the moratorium.