Elon Musk, who yesterday spent $44 billion buying Twitter, has put some money towards decarbonizing the atmosphere.

The Musk Foundation, a grantmaking body run by Musk and his brother Kimbal, is sponsoring a $100 million Xprize to develop carbon capture technology. This week, 15 research teams each received a $1 million "milestone" grant in recognition of their efforts to produce innovations that can develop toward large-scale carbon capture. One overall winner will receive the remaining $80 million in 2025. 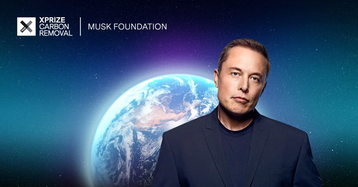 It is the largest ever Xprize, but amounts to about one-hundredth of a percent of the price Musk is paying for Twitter. It is also small compared with the $925 million put up by Stripe, Shopify, Meta, and Alphabet, in advance commitments to buy actual carbon removal services.

"The Xprize Carbon Removal competition was launched to encourage carbon removal innovators to work on tackling the biggest threat facing humanity: fighting climate change and rebalancing Earth’s carbon cycle," said the Xprize announcement. It's the largest incentive prize at Xprize, or anywhere else.

The winners at the milestone stage come from Australia, Canada, France, Iceland, Kenya, the Netherlands, the Philippines, the United Kingdom, and the United States. All are eligible to continue, competing for the grand prize, with new contestants also welcome to join.

The technologies being tackled include new and previously known systems for carbon removal, including biochar, agricultural solutions, organic and inorganic ocean solutions, mineralization of mine tailings, direct air capture with geologic sequestration, agroforestry, soil carbon, and more. Winning solutions have to work, provide net negative emissions, and sequester carbon dioxide for at least 100 years - while having the potential to scale to gigaton scale.

To win, any technology will have to be executed and delivered, at a scale of one million tons per year, with a pathway towards one gigaton per year.

Originally, the price attracted more than 1,000 entries, which was narrowed to 286 by the eligibility criteria. Entries were screened by expert reviewers and ranked, to whittle them down to 60. After that, judges probed further on operational plans to get down to 15 teams issued with the interim $1 million milestone awards.

All fifteen teams are eligible for the final award, and other teams are welcome to join in the contest. Registration closes on December 1, 2023.

“One year in, we already see the positive impact of the prize: hundreds of groups working on a wide range of promising carbon removal solutions. Not just ideas, but development and deployment plans, which is exactly what we need. The pace and depth of initiatives in carbon removal and other crucial climate solutions has never been greater, but we still need more — more and deeper emissions cuts, and more reliable, validated carbon removal solutions. That’s why we launched this prize in the first place,”  said Dr. Marcius Extavour, chief scientist and vice president of climate and environment at Xprize.

The winners included six teams working to remove carbon from the air - 8 Rivers Capital and Sustaera from the US, both Heirloom and Verdox from US/Iceland, Carbyon from the Netherlands, and Project Hajar from the UK.

Three looked at the ocean - Captura from the US, a Marine Permaculture SeaForestation project from the US, the Philippines & Australia, and Planetary from Canada

Xprize contests don't always run to completion. In 2016, IBM's then-popular Watson division announced a $5 million contest for the first AI to deliver a convincing TED talk. The 2020 closing date has come and gone without a winner being announced.