After declaring it as legal tender in the country

The move follows the country becoming the first to recognize the controversial cryptocurrency as legal tender, despite Bitcoin's environmental impact and the lack of Internet penetration in El Salvador. 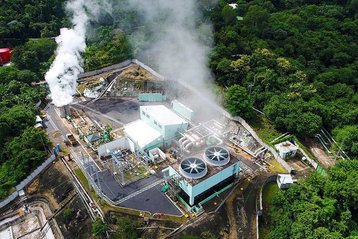 "I’ve just instructed the president of LaGeo (our state-owned geothermal electric company), to put up a plan to offer facilities for Bitcoin mining with very cheap, 100 percent clean, 100 percent renewable, 0 emissions energy from our volcanos," Bukele, a former marketing executive, said on Twitter. "This is going to evolve fast!"

Two hours later, he added: "Our engineers just informed me that they dug a new well, that will provide approximately 95MW of 100 percent clean, zero-emissions geothermal energy from our volcanoes.

"Starting to design a full Bitcoin mining hub around it."

In a separate Twitter Spaces discussion, the president said that the country was seeking multiple uses of land near geothermal plants.

In 2019, roughly 21.8 percent of the nation's power came from geothermal power - totaling a little less than 200MW. LaGeo estimates a total of 644MW is possible to be harvested from geothermal power, and last year said it planned to expand capacity by 87MW over 5-6 years (it is not clear what the 95MW Bukele is referring to this week).

"If all 644MW of the wasted geothermal energy was used, El Salvador would become one of the largest Bitcoin miners in this hemisphere, while also being 100 percent renewable," popular crypto commentator Documenting Bitcoin said - although more than 193MW of that energy is currently used to help power the country, and the remaining untapped resources could help it reduce emissions or export energy in the future.

Critics have questioned the usability of a cryptocurrency in a country where only around 33.8 percent of people have Internet access, according to the World Bank. The volatility of the currency may also make it difficult for businesses to operate.

“It was an idea that occurred to the president and became law within hours,” David Morales, of the Cristosal human rights group, told The Guardian. “This kind of important decision is made as part of a marketing strategy, instead of having a real national debate.”

Miners have also turned to geothermal power in Iceland, with locals complaining it helped fund power plant expansions that have taken over popular hot springs.

Over in Ukraine, the country is considering using excess load from its nuclear power plants to mine crypto.

But such nominally low-carbon mining is just part of a wider industry that has enormous power requirements - and a staggering carbon footprint that is thought to be more than twenty times that of the entire nation of El Salvador.

Many Bitcoin mines around the world use coal, gas, and oil, and have been responsible for resurrecting otherwise uneconomical fossil fuel plants.

There are fears that El Salvador's embrace of Bitcoin will boost the value of the currency, ultimately leading to more emissions elsewhere.

Also of concern is the embedded cost of the data centers and mining rigs, which rely on carbon-intensive steel and rare earth metals to function.