EcoDataCenter to reuse heat in fish farms and greenhouses

Sweden's EcoDataCenter will be sharing its excess heat with a local circular industry player to enable food production.

EcoDataCenter and Wa3rm will focus on large-scale cultivation in fish farms and greenhouses in the projects, though further details haven't been shared. 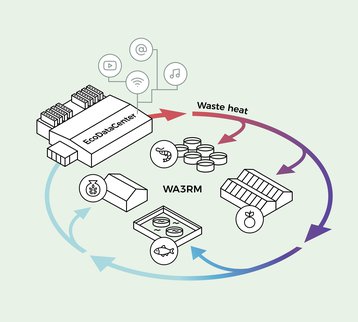 Data centers are increasingly offering waste heat for reuse, although the economics of the practice are still difficult to negotiate.

Using waste heat for agriculture is well-established, with greenhouses heated by waste data center heat, for some years - for instance, TeleCity did it in Paris in 2010. Other organizations using waste heat to grow plants include ITrenew and BlockHeating, while crypto provider UnitedCorp proposed greenhouses for a dome-shaped facility in Quebec in 2019. Digital Crossroad in Indiana has a data center that includes a test center for agricultural robots.

There are several data centers warming fish farms with their waste heat, including Green Mountain in Norway, and the White Data Center in Japan

The partners argue that such current projects are usually on a small scale, and want to set standards for industrial-scale vegetable and fish farming.

"It is of the utmost importance to also industrialize circular processes on a larger scale rather than only implementing smaller circular systems because of the symbolic value,” said Dan Andersson, CEO of EcoDataCenter.

Thomas Parker, CEO of WA3RM, said: “Data centers are generally an under-utilized resource with fantastic potential for bio-based systems like ours, which in Sweden require a lot of heat input and therefore draw much energy as stand-alone operations. Through our collaboration, we can also take significant and essential steps towards making Sweden self-sufficient in several food products."

The partners plan to announce their first project soon.

EcoDataCenter was formed as a joint venture between local energy company Falu Energi & Vatten and data center operator EcoDC AB and announced its first project in 2015. Nordic real estate developer Areim took a majority stake in the firm in 2018. The company operates five data centers across three sites in Falun, Piteå, and Stockholm.