250 petaflops - but on single-precision

The company plans to start building out a second, identical, data hall by late 2019. 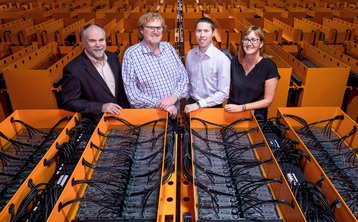 Bubba will use Intel Xeon Phi 'Knights Landing' CPUs, the high-performance computing processor that Intel quietly killed last year. DUG said that it had a commitment from Intel to continue to supply it Phi chips for its current expansion plans.

The company claims that work is currently underway for DUG to expand the supercomputer facility at Skybox beyond an exaflops (double-precision) by 2021. “We are in a race to build the first exascale supercomputing system,” said Phil Schwan, CTO for DUG. That year, the US government will also launch its first two exascale supercomputers, Aurora and Frontier, costing $500m to $600m respectively.