Utility Dominion Energy plans to build a 230kV double circuit transmission line and switching station in Loudoun County, Virginia, to support data centers in Arcola, where Google has a data center under construction.

The first phase of the 0.6-mile (1km) project is expected to be live by May 1, 2021, should it receive state approval. The proposal is subject to ongoing environmental studies and public hearings. 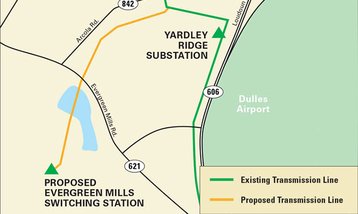 In an application filed with the Commonwealth of Virginia's State Corporation Commission, Dominion states that "the proposed Project is to serve load growth of 'Data Center Alley' in Loudoun County; maintain reliable service for the overall growth in the Project area; and to comply with mandatory North American Electric Reliability Corporation Reliability Standards."

If approved, its first phase will see the construction of the Evergreen Mills Switching Station, and the first part of the transmission loop, for a cost of $21.2m. The second phase, expected to cost $9.1m and be completed by 2025, will see the second section of the loop finished, and the installation of additional breakers at the switching station.

A separate fact sheet on the project states that the transmission structures will include 11 galvanized steel monopoles, averaging 115 feet tall. There will also be two H-frame structures (55 foot) and 13 pole structures (35 foot). 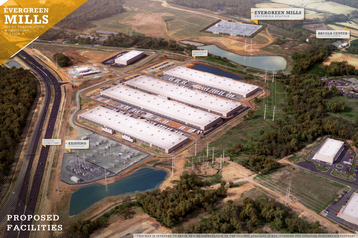 While the current application focuses on supporting data center load generally, other documents note that "the station along with new transmission infrastructure is needed to provide service to a data center being constructed in the area." The facility, whose operator is not listed in Dominion's documents, is elsewhere noted as being adjacent to the switching station. The company also "agreed to pay to accelerate the transmission interconnection," a Dominion application states.

In 2017, Google acquired 91 acres of land next to the proposed switching station for $58 million, along with another site at the nearby Stonewall Business Park for $31m. Dubbed the Dulles Arcola Center data center, the campus is currently under construction, with the company permitted to build up to 2.35 million square feet of data center space.

On the other side of the proposed switching station are four data center buildings, whose owners are not readily made public. However, an FCC application was filed by a company using the address of one of the buildings - that company was Vadata, Amazon's data center affiliate.

A bids document from an electrical supply company, meanwhile, lists the name of another one of the four data centers as IAD 81, while a shipping receipt lists one as IAD 62. IAD is the naming system Vadata uses for its facilities.

Greenpeace's Virginia Clicking Clean report, which does not provide exact addresses, lists four AWS facilities as existing on one campus - IAD 62, 68, 81 and 83. Together, they have an estimated capacity of 176MW. Additionally, in July 2019, Amazon's data center affiliate Vadata acquired 90 acres of land elsewhere in Arcola for $116 million.

It is not clear whether it is Google or Amazon that are helping fund the switching station - although the station's proposed location appears to slightly overlap with land owned by Google. The other end of Amazon's campus also backs onto an existing substation.

But before Dominion's plans can be acted upon, the Department of Environmental Quality will have to study wetland impacts of the projects, as well as a separate environmental review.

On April 14, a public evidentiary hearing is set to be held. Written comments must be filed with the Clerk of the Commission by April 7, and refer to the project as Case No. PUR-2019-00191.