It's too expensive, it kills competition, and it's not even really renewable, says a group including QTS, Microsoft and Equinix

Dominion wants to introduce Rider TRG (total renewable generation), which would allocate renewable energy which Dominion buys in, across customers who have opted to pay a premium green electricity tariff. A group of large customers including Equinix, QTS, Microsoft, and Salesforce has said the proposal is not truly renewable, and designed to prevent competitors from offering truly renewable tariffs. 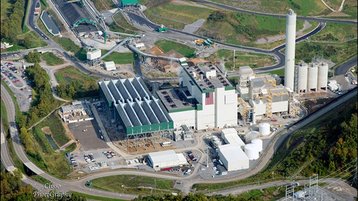 Most large data center operators have committed to moving to 100 percent renewable energy, but the grid providers have not kept up with this demand, so the cloud is trying to go green while the grid stays brown. The problem is acute in Northern Virginia, where the largest cluster of data centers in the world is growing so fast that the infrastructure is struggling to keep up. Dominion has a plan to build a pipeline to bring fracked gas to the Commonwealth of Virginia, which received trenchant criticism from a larger group of digital firms in May.

Now, under Rider TRG, Dominion wants to invite customers to pay extra for renewable energy, amounting to a premium of about 0.4 cents per kWh, which amounts to a 3.6 percent increase over standard rates for domestic users. Dominion, in turn, buys renewable energy certificates from renewable sources including solar, hydroelectric, and biomass plants, which are allocated to customers.

The group of 13 objectors, which also includes Marriott and Unilever, argues that this option is not truly renewable, and is designed to shut down competition.

Under a Virginia statute (Code § 56-577), customers are allowed to shop with alternative electricity providers, as long as Dominion does not offer an approved tariff delivering 100 percent renewable energy. If this tariff is approved, then Dominion customers will no longer be able to shop around.

"Rider TRG fails to meet the criteria we look for in utility programs and also closes off otherwise-available opportunities for our companies to pursue renewable energy through competitive service providers offering this service in Virginia," said the group in a joint letter to the State Corporation Commission. "For these reasons, we urge the Commission against approval of Rider TRG as proposed."

The group of large corporates says it has bought some 3GW of renewable power in other US states, and Dominion's offer falls short in their experience.

The proposal does not cause an increase in renewable generation, and a reduction in carbon emissions in Virginia, because it uses electricity from existing Dominion plants, and includes "substantial amounts of carbon-generating wood-burning biomass from standalone biomass facilities and from the biomass-fired portion of the output of an existing coal plant," the group says.

These don't amount to a reduction in carbon, says the group: "participating customers would not be able to credibly claim that their participation in Rider TRG has incented incremental emission reductions at all because the entire TRG portfolio already exists and operates in the absence of Rider TRG."

The signatories say they take part in renewable energy programs form utilities in order to drive the deployment of new renewable energy, and Dominion's suggestion is "insufficient" in this respect.

The group objects to the high price premium being charged on the capacity that is already installed: "Under Rider TRG customers would be asked to pay not only for the cost of already-rate based assets, but also to fund an extra premium to deliver RECs that are already being generated. Customers that want RECs can purchase equally impactful but lower-cost RECs from other sources."

And finally, the group points out that approval of Rider TRG would block other options because it would "preclude customers from pursuing 100 percent renewable energy offerings from competitive service providers," the group said. "Foreclosing competition where the utility is offering an inferior tariff at rates that are not reasonable or just is inconsistent with the public interest."

"We are advocating for everybody, because this is an erosion of the competitive agenda," Travis Wright, VP of energy and sustainability at QTS, told DCD. "The SCC will often got a very loud voice from one side of the argument, and if there’s no voice on the other side, it’s easy to believe that side of the argument."

The Virginia SCC (State Corporation Commission) exists to balance the interests of citizens and businesses across a very broad spectrum of issues, and the group hopes to clarify a complex and specialized issue. Virginia has a very complex "hybrid" electricity regime, which is both regulated and deregulated, which Wright suggests is very hard to administer fairly.

The SCC will consider the Dominion proposal and responses to it on November 21, with a decision expected sometime after November 22.