Will be one of the tallest data centers in the region

Digital Realty has entered into a definitive agreement to acquire a 22,000 sq ft land parcel for building a new multi-story data center in Seoul, South Korea. The facility is projected to support up to 12MW of critical IT capacity.

The land is sold by the Seoul Metropolitan Government and is located within the Sangam Digital Media City in northwest Seoul, a newly developed urban planning zone. Construction will commence in the coming months and expected to be completed in 2021. 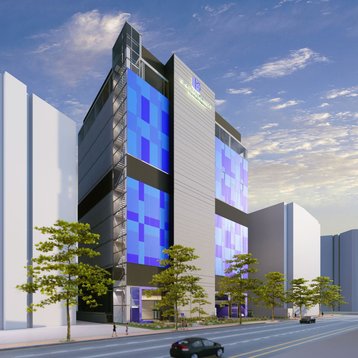 The data center will offer more than 129,000 sq ft (120,00 sq m) of space when completed, and at 10 stories tall, will be one of the tallest data centers in the region. Build on a rock foundation, it will also extend three levels underground – common for buildings in urban parts of Korea due to space constraints and regulation.

In response to a query from DCD, Digital Realty says that the lowest level will be used as a car park, with access via a mechanical car stacker. The other two underground levels will be used to house backup generators.

Digital Realty’s entry into South Korea is an important milestone for the company as it expands across the Asia Pacific, says CEO A. William Stein. South Korea is among the largest data center markets in the region, with an estimated population of more than 25 million in the Seoul Capital Area alone.

“South Korea is incredibly well positioned as a digital hub and center for innovation within the region, given the growing global demand for big data, mobile services and connected devices. Our investment in Korea demonstrates our commitment to powering our customers’ digital ambitions across a truly global platform,” he said.

When DCD previously spoke with Digital Realty about its APAC plans late last year, Stein shared that he expects the APAC data center market to mirror the huge growth experienced in the US over the last few years.

He also hinted that Digital Realty’s rapid growth could see the company hiring soon as the company expands beyond Australia, Japan, Hong Kong and Singapore – a move that has clearly materialized.