DCD>London: Supersized colos are struggling for space in Europe

The data center industry is struggling to keep up with rampant demand growth, and certain areas like Europe present deeper problems, as the data center colocation industry evolves to support cloud providers needing wholesale capacity, according to speakers at DCD>London today. 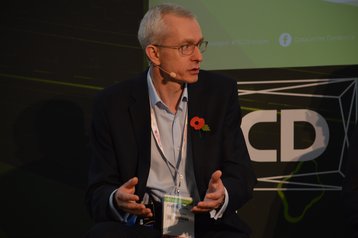 "We’re okay at the moment," said Andrew Jay, executive director of CBRE, in the opening panel session. "We’re at equilibrium." But he described a situation where that demand is getting bigger, when data center builders are already making new space as fast as they can, which echoes similar stories from other markets such as Northern Virginia.

In Europe, the four largest hubs - Frankfurt, London, Amsterdam and Paris, collectively known as FLAP - have been adding 175MW of colocation power capacity per year for some time, said Jay. A big surge of demand for wholesale capacity in colocation data centers is shifting the balance of power towards the cloud players, and changing the nature of the market, he said .

"The worry for me is the noises we’re hearing from the big hyperscale guys, and they’re talking 500MW in 24 months," he said. "That’s a paradigm shift."

With large players needing campus style data centers, the industry is facing issues with building out, which vary from country to country, said Jay. For instance, In Ireland, power is an issue, while no one can get a 100-acre campus near London, because there is no available land: "It doesn't exist, no matter what money you have."

"Europe is a very difficult market," said Jim Smith, managing director of hyperscale at Equinix - a new post at the colocation provider, created by the shift in power towards hyperscale demands. Every market in Europe is an urbanized environment, where land is used for offices, he said, and it's hard to get space and power there. In London, power availability is a big issue, he said.

Every market has different issues, said Joe Kava, Google's vice president of data centers: "In Tokyo, power is a two year negotiation before you get the agreements. In other places the issue might be as mundane as the air permits for diesels."

Dave Johnson of Schneider Electric said the power demand for data centers wasn't a crisis - but the telecoms industry could be a more demanding user: "It's not really that bad," he said. Data centers use some 200TWh of energy per year, which is less than one percent of total global electricity use, which is around 22 thousand TWh. At the current growth rate, data centers could consume six percent of the world's energy by 2025.

Mobile data has more significant growth at 11 percent each year, he said: "Telecoms are going to make a dent in electricity usage."

The panelists agreed that data center builds were standardizing, with vendors providing pre-configured hardware to meet the demands of wholesale customers. "There's not enough standardization yet," said Smith, and Johnson agreed: "The more we head in that direction, the better off we are all going to be."

Thank for downloading the full presentation, we will email this to you shortly.