The next ten years are critical to shifting the world onto a sustainable track, but telecoms and video usage are growing out of control, and the data center sector still doesn't have reliable data on energy usage, according to the opening panel at the London event today. 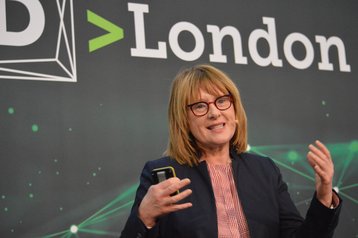 "When your technology changes the world, you bear the responsibility to help the world you helped to create," said Noelle Walsh, Microsoft VP of infrastructure innovation.

But the steps from that aspiration to reality are hard, the panel said..Although large data center players have made commitments to green energy, they are part of a wider ecosystem, tied to electricity grids which still rely on fossil fuels.

"The growth of the sector is driving investment in the wrong direction," said Gary Cook, Greenpeace's senior campaigner for the IT industry, referring to plans by Dominion Power in Northern Virginia to build a new pipeline to bring fracked gas to the world's biggest data center hub. "The system is driving investment in sources of energy we can’t afford," said Cook.

This year, Amsterdam announced a pause on new data center projects, partly as a response to their demands for energy and land. "They should have had a moratorium on gas plants, not data centers," said Cook.

The sector's biggest problems are unreliable data on its environmental impact, and a lack of feedback which might drive consumer behavior in a positive direction, the panel said.

While most people agree that data centers use around two percent of the world's electricity, there is a lot of argument around the accuracy of this figure, and it ignores the bigger picture of all the energy consumed in the network infrastructure.

Around ten percent of the world's electricity is consumed by digital technology, when you factor in the networks that transmit the data and the devices that display it, said Dr. Mike Hazas of Lancaster University: "Watching video and online streaming is around 50 percent to 70 percent of downstream traffic," he said. "And it’s going up."

Consumer awareness might slow that growth, he said, but at the moment users are not aware that, for instance, the energy demand in streaming a movie over 4G to a phone is actually far higher than that used in watching it on a networked laptop or TV.

Telecoms is the fastest growing part of the footprint of digital infrastructure, said Dave Johnson of Schneider Electric. Data centers use around 300TWh out of the world's total of 24,000TWh of electrical energy per year, he said, but telecoms use 400TWh, and the total usage of Edge capacity and devices could be as much as 500TWh: "Add that up, and it’s about five percent of the total."

Even though digital infrastructure is growing massively, its share might go down because total electricity usage is growing so fast, with factors such as the shift to electric cars, said Johnson.

"I don’t trust anybody’s numbers," said Andy Lawrence of the Uptime Institute. With unknowns such as the use of energy in server rooms, and the arrival of electric vehicles, he said, "the figures are all over the map."

As one example, Lawrence pointed to Bitcoin, the digital currency which uses colossal amounts of computing (and electrical) power - Uptime estimates Bitcoin's energy demand as 46TWh per year. "You can calculate it from the hashrate," he said. "That's an astonishing figure, between the consumption of Jordan and Sri Lanka. It's about the size of Austria’s electricity bill, the equivalent of 20 million UK homes... or 6 million US homes."

On any basis, Bitcoin is an environmental disaster, he said: "Proof of work using energy is a disgrace, and something we should condemn as an industry." 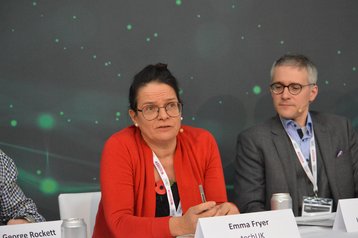 The UK is doing good work in actually measuring energy consumption by the sector, said Emma Fryer of industry group TechUK. "It's tough, but the commercial data center sector uses 2,9TWh, which is about 0.3 percent of primary energy." This doesn't include hidden facilities such as enterprise data centers or server rooms in the public sector, so the full figure is probably about two percent, she said: "It's really important to measure stuff, because our job is to minimize those numbers."

"The next ten years is what counts," said Cook, pointing out that the industry itself is already suffering the consequences of climate change. For instance, Cook referred to an incident in California, when the NERSC supercomputer had to shut down for three days due to a PG&E power outage:

"We need to have higher aspirations than to be on the top deck of the Titanic," said Cook. "We need to be steering the ship."

Lawrence offered hope that things might change in those ten years: "As millennials take political power, we will see more action than talk." He listed positive moves including a proposal in Amsterdam to mandate heat reuse, and regulations on standby generators in Santa Clara.

Lawrence has watched the green data center sector for more than 13 years, and said: "The first big wave was in 2007, but it petered out, and in the last year it is really coming back. People are rephrasing this as a climate emergency, not just something it would be nice to do something about."