Mayor of Stockholm Karin Wanngård welcomed the boom in data center construction across the city during her keynote at the DCD Energy Smart conference this week.

She suggested that smart cities of the future would be built around data centers, and that data center designers should be using all available techniques to benefit the urban environment and reduce their environmental impact – for example, recover waste heat and participate in regulation of the electricity grid.

Wanngård highlighted the fact that the entire city of Stockholm aims to become carbon-neutral by 2040, and that following tax cuts in 2017, Sweden offers the cheapest data center electricity in Europe - most of it coming from renewable sources – making it an attractive location for data center operators. 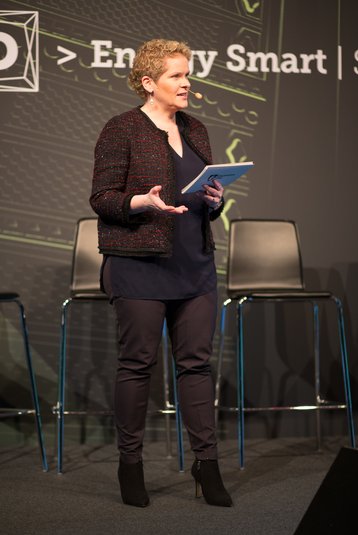 “I want Stockholm to become an example of how we can build and run a truly smart and sustainable city,” the mayor said. “A city where ICT and green energy are key ingredients, side-by-side with a circular economy that minimizes and optimizes the use of our precious resources.”

83 percent of electricity in Sweden is produced by nuclear and hydroelectric power stations, meaning Stockholm is well on the way towards its sustainability goals. But electricity supply is just one piece of the puzzle: the city also maintains one of the largest district heating systems in Europe, enabling municipalities to use waste heat from industrial buildings to keep residential properties warm in winter.

“Since 1990, despite a steep rise in population, with the more than 30 percent increase in the number of Stockholm residents, emissions from heating have fallen by more than 50 percent,” Wanngård said.

And Stockholm Exergi is an essential part of Stockholm Data Parks – an initiative launched in 2017 that offers parcels of land pre-approved for data center construction, with a supply of power, connectivity and the option to export waste heat.

“With several leading data center operators already present in Stockholm and committed to heat recovery, such as Interxion, Ericsson and Bahnhof, more than a percent of the city’s heating now comes from data centers, and our target is to reach 10 percent by 2035. This is an exciting opportunity for cities, energy companies and data center operators,” Wanngård said.

“Data centers are becoming such a significant factor in the development of our societies that they should be at the heart of the planning of our cities and energy infrastructure. As you know, all the precious electricity in data centers is converted into heat which could be recycled and used for heating the housing sector. The impact could be enormous: a 10MW data center has the potential to heat 20,000 modern residential apartments.

“While Stockholm is taking the lead in data center heat recovery thanks to its already existing large district heating system, this could also make economic and environmental sense in any city where low energy housing areas are being built.

“The logical conclusion is that data centers and the planning of cities should go hand-in-hand. This will not only make environmental sense: as the fight to combat climate change accelerates, I am sure that the market and legislation will favor data center operators who contribute to smart and sustainable future while they also reap the economic benefits of heat recovery and contributing to tomorrow’s electrical grid.”