DCD Magazine issue 44 out now: A lost history of computing risks being forgotten

Plus understanding the future of data centers in Northern Virginia, Dublin, and Singapore

This latest magazine is all about time. It took three years to find the images for the cover feature, some of which have not been published in more than three decades.

The relentless march of time could also mean the end of other photographs from the historic collection, as they risk being lost to history.

We uncover this forgotten archive, and tell the story of how it came to be. 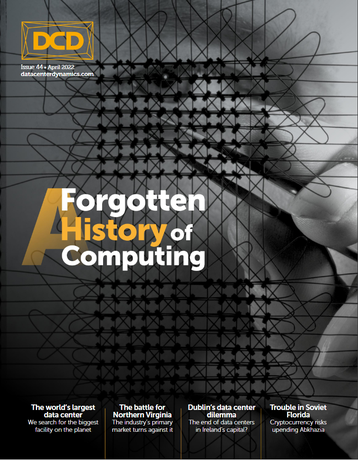 The people vs data centers

Elsewhere in the magazine we look at three stages of data center community conflict - In Northern Virginia, where the market may be hitting saturation point; in Dublin, where it seems like the end is nigh; and in Singapore, where the market is opening back up.

We speak to Princeton Digital Group CEO Rangu Salgame about building a pan-Asian data center business, and why he has chosen to exclusively focus on meeting the needs of hyperscalers.

The largest data center in the world

Who operates the world's largest data center? We go on the hunt for the biggest on the planet, in what proves to be a surprisingly difficult search.

Submarine cables aren't just useful for connectivity, they could also hold the key to understanding our oceans and predicting the worst of climate change.

Spinning up a quantum computer

We tour Quantum Motion's lab and talk to the ex-head of Google's quantum computing endeavors about silicon qubits.

Logistics giants like Prologis are coming for the data center

How to ensure background radiation doesn't impact hardware at scale.

We talk to those taking out loans backed by sustainability targets.

The end of techno-optimism

Why we can't wait for new technology to save us.

The latest news, Peter's factoid, and an entire Automation supplement about drones, AR construction, and networking