The number of staff needed to run the world's data centers will grow from around two million to nearly 2.3 million by 2025 - but the sector is closing the door to potential candidates by setting the bar to entry too high, according to research from Uptime Institute Intelligence.

Staff are needed for multiple roles in cloud and colocation data centers all around the world, but there is a "disconnect" in the industry which has created an ongoing skills crisis, according to the report, Global Data Center Staffing Forecast 2021-2025. The numbers quoted are just for "safe operation" of the data centers, and while many operators still hope to solve the problem with automation and artificial intelligence, the report warns that won't work. 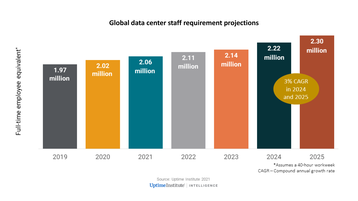 Requirements may be too high

"Everybody in North America and Europe understands there’s a staffing challenge, but there’s a disconnect," said Rhonda Ascierto, Uptime's head of research and lead author of the report. "Operators are setting minimum requirements, but staff don’t need a university degree or even a trade school qualification. These can be substituted for equivalent experience. By doing the first quantifiable study of the sector, our hope is that we will really highlight to employers that their requirements for candidates may be higher than necessary."

Part of the problem is the sector is invisible, Ascierto told DCD, so there needs to be more work from operators and educational institutions, to simply make potential candidates aware of the opportunity: "There’s a huge lack of awareness of the sector, which is growing at an astronomic rate. It shows no sign of slowing and it needs people. People don’t know the sector is there, and don’t consider it as a career."

Fifty percent of those surveyed said they were currently experiencing difficulties finding candidates for open positions. Uptime doesn't say how many people it spoke to but says it conducted "in-depth interviews with infrastructure and executive managers at companies across major geographies that combined own about 350 data centers," and then combined that data with its own internal statistics on the number and types of data centers worldwide, to come up with "the actual numbers," said Ascierto. "This isn’t a guess, but a well-informed estimate." 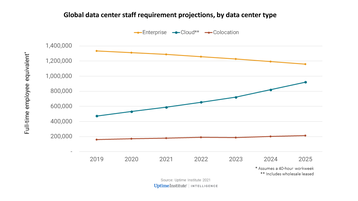 The study noted that enterprise data centers will need less staff as they are consolidated away - but the growth in colocation will more than make up for that.

There are some 230 different job functions in the industry, which group in domains including business support, strategy, operations, engineering, IT hardware, and networking. The study explicitly left out neighboring sectors such as telecoms, or new arrivals such as Edge data centers.

There's been huge interest in automating data center jobs, said Ascierto, "and interest in automation has skyrocketed during the pandemic." However, most of these job functions cannot be automated: "These are human-driven processes. Once you do have greater automation, will still need people to troubleshoot. AI can’t troubleshoot; if there’s an incident or an outage, you need people to physically fix the problem."

Training will be "critical to the future workforce," said Ascierto told DCD, but there's a "dearth of data center training globally". She argued that schools and colleges should be encouraged into taking part in this, as it's a good way to catch people early: "One of the real advantages of institutionalized training is that you are able to potentially exploit the talent pool at an early stage in their careers." Institutional involvement could also break the gridlock around increasing diversity in a workpool that is still dominated by aging white men.

Getting colleges involved is hard though, because public sector bodies need data to justify involvement in programs for any sector - and this was the reason for doing the study, she said.

"You can work in this sector without a four-year degree and be really successful," said Ascierto. "Companies should take a long hard look at their minimum requirements. Data centers tell us they cannot find qualified candidates for jobs - but if they dropped that word "qualified", what would happen?"