Data center operators may be ready to share UPS batteries with the grid, says report

Up to half the energy in UPS batteries is spare and could be used elsewhere, says Omdia

Data center operators will be upgrading to grid-aware uninterruptible power supplies (UPSs) to support energy management measures, in the next four years, according to research group Omdia.

Electricity grids need to become more dynamic, as renewable energy supplies don't match demand. Data center UPSs could offer a portion of their energy to smooth out peaks in demand. Data center operators have resisted the idea, as the UPS's main job is to keep their facilities online - but this resistance is waning, as suppliers are offering better grid-aware UPSs and operators are more confident that they can spare the energy, according to the study by Moises Levy, principal analyst for at data center power, cooling and sustainability at Omdia. 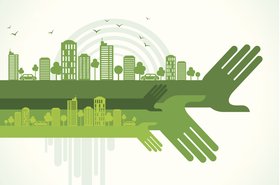 Demand response - is there a demand?

Data centers can play a role in cutting emissions and reducing the strain on the grid. But why should they?

The result should be treated with caution, however, as the study had a small sample.

“The integration of renewable energy into the smart electric grid can benefit from [a] smart grid-ready UPS, to smooth out the unpredictability of renewable resources, balancing energy supply and demand, and to reduce or defer electric grid infrastructure investment,” said Levy. “Manufacturers like Eaton, Schneider Electric, and Vertiv are already offering UPSs with these capabilities.”

Techniques like fast frequency response (FFR) use only a fraction of a data center's battery power, for a short period, to balance the grid., but they require the data center operator to hand over a measure of control to the grid operator. There are signs that this may be becoming acceptable to operators - for instance, Telia in Finland recently worked with Fortum to connect its flagship data center to the grid

Omdia claims it has found that more than three-quarters (77 percent) of operators are now "confident" that sharing stored energy won't put their mission-critical applications at risk. The report also says that a majority (80 percent) of the people it spoke to believed that up to half the energy in their batteries was spare anyway.

However, Omdia bases this on a survey of only 380 people - and an undisclosed number of these are not data center operators, since the study also includes utility firms, engineering companies, and architecture and consulting firms. The study is also spread thin around the world, apparently covering the Nordics, UK, Ireland France, Germany, and Australia.

Of these countries, the Nordics, the UK, and Ireland are the regions with the most grid-ready UPS systems deployed, Omdia says.