CyrusOne has gone from ground breaking to completion of a 30 Megawatt data center in 180 days, beating records for similar sized facilities. 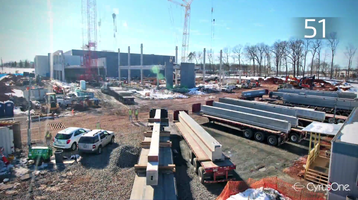 “CyrusOne’s goal has been to improve our supply chain efficiency to the point whereby we can deliver a completed data center in the same timeframe that our customers can order and receive the computing equipment that will reside in the data center.” said Gary Wojtaszek, president and CEO at CyrusOne.

“We never want our customers’ business objectives to be slowed down by the speed of their data center deployment, and the record setting time we delivered the Northern Virginia facility proves we can remove that uncertainty for them.”

CyrusOne’s VP of data center design and construction Laramie Dorris added: “Completing a data center of this magnitude in this short time frame is a monumental accomplishment and it continues to prove out CyrusOne’s ability to meet even the shortest customer deadlines.

“By accomplishing this feat, we have completely revolutionized the dynamics of building out new infrastructure for the industry, and established a new norm for rapid deployment and expansion of customers’ critical infrastructure.”

CyrusOne previously managed to set a record when it constructed a 6 MW facility in Phoenix in 107 days.

The company has aggressively expanded in recent years, and only last week announced it had purchased more land in Northern Virginia for further data center construction.