Cray to offer supercomputers with Fujitsu A64FX Arm processors from 2020

The exascale era is here

Cray, the US supercomputer company recently acquired by HPE, will partner with Japan's Fujitsu to offer Arm A64FX processors in its systems.

The partnership will also see the two companies 'explore' collaboration on engineering, co-development, and go-to-market strategies.

Two Arms are better than one

The chip also supports HMB2 (High-Memory Bandwidth), with the A64FX expected to have a maximum theoretical memory bandwidth greater than 1 terabyte per second.

It is set to be used in the Post-K 'Fugaku' supercomputer, Japan's first exascale system, which is on track to start operations in 2021 or early 2022.

“Our partnership with Fujitsu means customers now have a broader choice of processor technology to address their pressing computational needs,” Fred Kohout, SVP and CMO at Cray, said.

“We are delivering the development-to-deployment experience customers have come to expect from Cray, including exploratory development to the Cray Programming Environment (CPE) for Arm processors to optimize performance and scalability with additional support for Scalable Vector Extensions and high bandwidth memory.”

Stony Brook University, one of the first customers, said that its Cray-Fujitsu system will be named Ookami (Japanese for wolf). “Funded by the National Science Foundation, the new system will boost national competitiveness and enable US researchers to achieve extremely high performance for a wide range of applications," Robert Harrison, principal investigator and project director for the university, said.

"Memory-bandwidth-intensive applications will be especially accelerated by the ultrahigh-bandwidth memory while still being able to employ familiar and successful multi-core programming models." 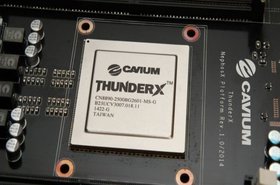 Over in the UK, the University of Bristol will use an A64FX-sporting Cray system next year, known as Isambard 2. “We’ve been on a journey toward Arm-based supercomputing and the new Cray and Fujitsu Arm system will bring us closer to that reality,” Simon McIntosh-Smith, professor of HPC at the university, said.

“We are looking forward to innovating and pushing the boundaries of what Arm technologies are capable of and witnessing the tremendous performance that will come about on the Cray A64FX Arm supercomputer."

“There are few existing architectures that currently serve this workload well. We are excited to see a potential solution and are happy to be helping prove this Cray and Fujitsu technology is a viable alternative for this need."