Earth Wind & Power, the Norwegian firm which aims to make good use of power wasted at energy sites, has bought a 1.8MW container data center from Cloud&Heat, a Dresden-based maker of efficient modulear data centers.

The 40-foot data center module contains 144 water-cooled servers, and can be used in temperatures between -30oC and +48oC, and will be delivered in the second quarter of 2022. Earth Wind & Power and Cloud & Heat have not announced a specific location for, it but say it will be used for joint research, announced in August, to further EWP's plans to harness power which would otherwise go to waste at wind and solar farms, as well as oil wells. EWP says micro data centers like those provided by Cloud&Heat will be installed in remote energy-rich sites to run tasks including HPC and bitcoin mining.

The Cloud&Heat container was co-designed by bitcoin mining company BitFury. 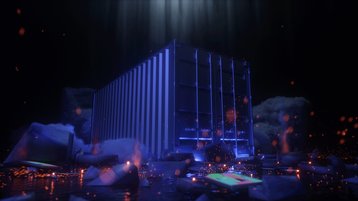 EWP is led by former Norwegian Minister of National Public Security and Deputy Minister of Petroleum and Energy, Ingvil Smines Tybring-Gjedde, and has plans to harness energy from wind and solar plants which may not be in synch with grid demands. It has a partnership with investment company Valinor Energy which funds wind and solar projects round the world. but it also has funding from PetroNor executives Knut Søvold and Gerhard Ludvigsen and its first announced project is in the petroleum industry - a feasibility study with Rapid Oil Production to put data centers on Rapid’s Fyne field project in the North Sea.

Though EWP is thereby installing fossil-powered data centers, these will be green, a company spokesperson explained to DCD, that this is simply harnessing gas flares which would otherwise be burnt wastefully. Burning the gas for energy used in the data center will ensure a fuller combustion, so less methane will be emitted, and more will be burned, turning into water and CO2 which is a much less potent greenhouse gas than methane.

Nicolas Roehrs, CEO of Cloud&Heat told DCD: "It's not intended to create new oil and gas sites. We and especially EWP are offering a way for existing oil and gis fields to reduce their carbon footprint and to decarbonize the complete production process in this industry."

The value of the processing may be debatable. The presence of BitFury makes it clear that bitcoin mining is a major application, and Roehrs agreed: "The final goal will be to implement / setup HPC sites. Since this is the first container DC we will start with some blockchain application."

Bitcoin mining already consumes a vast amount of electricity worldwide, with some estimates putting its consumption as equal to that of Argentina, with no real-world benefits.

EWP's website majors on blockchain/bitcoin mining as a major user for the company's processing capacity. The "Fact Center" quotes a prediction from Fortune Business Insights that blockchain will reach $69 billion by 2027, and one from Gartner that it will generate $3 trillion by 2030, and may be running 20 percent of the global economic infrastructure by then.

A downloadable company brochure seems to be moving away from the mining emphasis, listing several other applications such as 3D rendering, simulation and image processing, which can be done at remote sites if there is a good data connection and the power is not too intermittent.