The Chicago Community Development Commission approved the sale of the former Michael Reese Hospital site to the GRIT consortium of development firms for $96.9 million.

The 71-acre site will be developed into the Bronzeville Lakefront; a $3.8 billion scheme that includes a mix of commercial space, residential housing, and a data center.

Founded in 1881, Michael Reese Hospital closed in 2009. The City acquired the property in 2009 and cleared most of the land shortly afterward. The site was put forward as the site of an Olympic Village for Chicago’s 2016 Olympic bid, and was also proposed as a potential site for Amazon’s second headquarters. 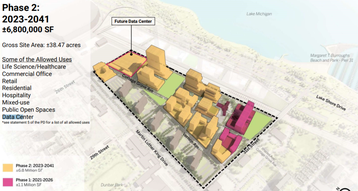 One of the main commercial developments on the new Lakefront site would be the 500,000 square foot ARC Innovation Center. A division of Sheba Medical Center, the center would be a hub for local startups and medical research.

As well as the ARC Innovation Center, Welcoming Center, parks, and residential housing, the development includes a data center to be built in phase 2. The Commission approved the plans in February, construction could begin in 2023.

The data center would ‘attract and support’ the life science ecosystem, with the ARC Innovation Center as the anchor tenant. Waste heat would be reused to warm other buildings on the development as well as heating an on-site greenhouse for growing food year-round. The facility would include solar panels on the roof and battery storage as backup.

The land sale and development plan still requires approval by the City Council Zoning Committee and the full City Council.