The system is expected to go on sale in early 2017

German power protection specialist Piller has revealed a hybrid uninterruptible power supply (UPS) that can support up to 360 kW of IT equipment in a compact footprint with integrated energy storage.

Piller says its Critical Power Module (CPM) will address both, capital and operation expenditure for data centers and will make a significant difference to the total cost of ownership (TCO).

The CPM 300 is on display at the CeBIT exhibition in Hanover, which concludes on Friday. 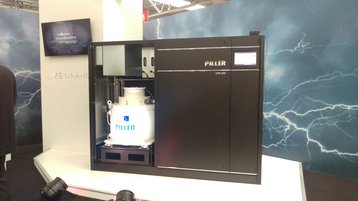 Piller is a German company with more than a century of history, specializing in rotary UPS, hybrid UPS, diesel UPS, static UPS and static transfer switches, for both civilian and military applications. Its customers include the Bank of England, European Central Bank and the Euronext stock exchange.

According to Piller, CPM 300 and 360 take up to 75 percent less space than a comparable battery-based UPS, and can react to changes in current much quicker than other types of power protection systems.

CPM systems rely on kinetic energy to provide constant power and ride-through, giving the data center operators time to switch on the generators in the event of a complete power outage.

They require no additional cooling, unlike lead-acid batteries that degrade in higher temperatures and must be inspected regularly. The power protection equipment features a self-contained heat exchange system that can reliably operate in temperatures of up to 50 degrees Celsius, making it suitable for modern high density data centers.

Piller promises conversion efficiency of up to 98 percent, and even higher in ECO mode. The CPM models will feature five modes of operation, including something the company calls a ‘self-learning algorithm’.

The technology is expected to be market ready next year, following extensive type testing.