The Cat G3516H gas generator, operating at up to 1250kW on 50 or 60Hz and running on 100 percent hydrogen, will arrive in the fourth quarter of 2021 in North America and Europe. Commercial deliveries will follow in late 2022.

Caterpillar is also starting to supply commercial units of gas generator sets designed to operate on natural gas blended with up to 25 percent hydrogen, providing power up to 4.5MW. The Cat CG132B, CG170B, G3500H, G3500 with Fast Response, and CG260 gas generators will be available in North America and Europe, and Caterpillar will also sell retrofit kits with hydrogen blending capabilities, that can upgrade some existing Cat turbines to run on 25 percent hydrogen for select generator sets built on these engine platforms. Production of new natural gas generator sets and retrofit kits will begin in the fourth quarter of 2022. 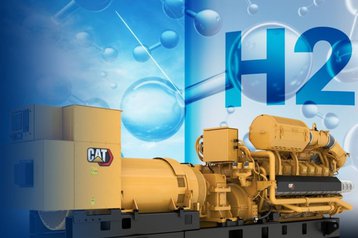 Caterpillar says it has been offering gas turbines which burn hydrogen blends for decades, in its "Solar" turbines range. Turbines operate by burning fuel and using the resulting pressure to turn a turbine, producing a continuous flow of energy. However, turbines are slow to start up, so backup applications such as data centers normally use reciprocating engines with pistons, as normally seen in diesel or other engine generators.

“At Caterpillar, we are working alongside our customers to understand their needs, and they are looking for reliable power sources that support their climate-related goals,” said Joe Creed, Caterpillar group president of energy & transportation.

“The power solutions landscape is transforming as customers look to maximize the environmental and economic benefits of reducing their carbon intensities,” said Bart Myers, general manager for Caterpillar large electric power. “We’re extending our leadership through numerous initiatives that demonstrate the viability of power solutions that can utilize many types of hydrogen, including fully renewable, in order to shorten the path to commercial availability.”

Efforts to decarbonize society include the use of a "hydrogen economy" where hydrogen takes the place of diesel fuel as a high-density energy source to be used as needed. Pure hydrogen does not produce greenhouse gases when burnt (hydrogen burns to form water), and it is possible to produce it with low emissions, by using electricity to electrolyze water.

Most efforts to bring hydrogen into use are concentrating on fuel cells, which can burn either hydrogen or methane (natural gas).