Edge at the edge of space

Amazon Web Services (AWS) has worked with Axiom Space to operate a Snowcone SSD on the International Space Station (ISS).

Snowcone is AWS' smallest Edge 'Snow' device, which spans a number of devices all the way up to the Snowmobile truck. 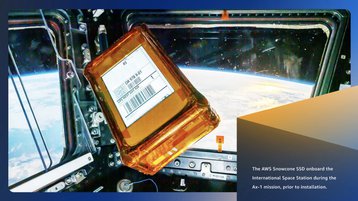 Axiom Space plans to build the world’s first commercial space station in phases from 2024, as well as habitable commercial modules to be attached to the ISS. The company is run by a number of former NASA employees, including former NASA Administrator Charles Bolden.

At Amazon re:MARS 2022, AWS announced that it has worked with Axiom to bring a Snowcone to the ISS and perform Edge processing on space-based datasets - after a seven month NASA testing process to ensure it was safe to put in orbit.

Both projects aim to help lead to more space-based processing. This is useful for satellites, which often have to send down reams of unprocessed data which could instead be filtered and compressed in orbit. As humanity moves further from its home, local compute will also be necessary to combat increasing latency.