Mayo County Council has authorized the sale of two plots of land earmarked for data centers in Killala, Ireland.

First reported by MidWestRadio and the Connaught Telegraph, the county council this week approved the sale of the land in Tawnaghmore Upper and Mullafarry to Avaio, which reportedly plans to develop a ‘Mayo Green Data Hub’ on the sites. The company is to pay €790,000 ($895,000) for the first 14.5-hectare plot in Tawnaghmore, and €625,000 ($708,000) for the second 12.1-hectare plot in Mullafarry. 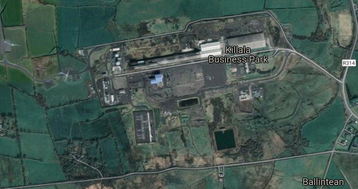 The land is part of what is now known as the 160-hectare Killala Business Park. Japanese chemical company Asahi manufactured acrylic fiber from acrylonitrile at its factory on the site from the mid-1970s until its closure in 1997. The two plots of land Avaio is acquiring are to the south of the former Asahi site on undeveloped land.

The sale is the latest development for the area. The former Asahi site was previously selected as the location of a biomass power plant; construction work began in 2015 and was due to be completed in 2017, but its owners fell into financial troubles and fell into liquidation around 2016. Former owner Mayo Renewable Power was succeeded by Mayo Renewable Ltd, which in 2019 proposed developing a data center on the site under proposals for a ‘Killala High-Efficiency Data Park’.

AquaComms built a cable landing station in the park for its AEC 1 cable around 2016.

According to a property listing from DNG Group, the Killala Business Park site includes a 12,000 sq m warehouse on a 15.6-acre plot with planning permission for a 26,000 sq m (280,000 sq ft) data center; a 45MW biomass power plant construction site; a 110kV ESB Substation; a 100MW SSE emergency peaking power plant; the 21MW Killala Wind Farm; a site with planning permission for a 100MW battery storage facility; and the cable landing station for AquaComm’s AEC 1 cable that is the proposed landing point for the AEConnect 2 & Celtic Norse Cables.

Local councilor Jarlath Munnelly, at the monthly meeting of the council, said the project has enormous potential for Mayo and the west of Ireland, and particularly the Killala area. Councillor Michael Loftus hailed the project as 'a game changer' for Killala, noting the construction phase could employ between 750 and 1,000 people.

Founded in 2016, Avaio Capital is a US infrastructure investment firm focused on the digital, water, energy transition, and transportation sectors. Last February the company launched Avaio Digital Partners to focus on build-to-suit development and construction of sustainable hyperscale data centers in the Americas and Europe.

With $375 million in funding, Avaio said at the time the company had a pipeline of hyperscale projects already under development in the US, Canada, and Western Europe representing over 400MW of capacity.

The sale doesn’t detail the specifications for the proposed data centers, but MWR suggests the proposal includes the construction of a 20MW data center and will see the company invest €150 million ($170m) for the initial phase and up to €400 million ($453.5m) for the full completion of the project.

The project comes at a potentially difficult time for the Irish data center industry. EirGrid recently confirmed that it will not connect new data centres in Dublin ‘for the foreseeable future’ amid concerns about energy security. New applications to build facilities in the greater Dublin area will not be accepted until 2028 and any new data center applications will only be considered for other parts of the country on a case-by-case basis. However, Ireland’s Industrial Development Agency recently claimed that data centers were being “scapegoated” for an already existing energy crisis.