Albury City Council this week voted in favor of granting Leading Edge permission to construct a data center at the Airport Industrial Estate, despite objections and a consultant report recommending against the facility. 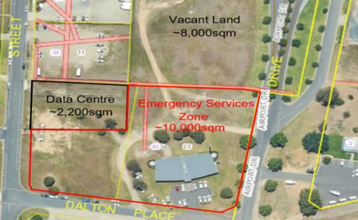 “The data center will expand connectivity options in the Albury-Wodonga regions, which will empower everything from the wider community to local businesses,” CEO Chris Thorpe said at the time. “Albury-Wodonga is a growing region, and this infrastructure will open up direct cloud access to major IT cloud environments in metropolitan areas, enabling faster processing speeds and greater functionality for digital applications.”

However, as the council owns the airport estate it engaged planning consultants Blueprint Planning to assess the proposals. And although airport staff voiced no concerns about the proposed facility, the report recommended that the application be denied.

The council’s 2018 Albury Airport Master Plan required construction there to serve the airport, and the report said the data center was not ‘related to the Albury Airport’ and “inconsistent” with the Master Plan and should therefore be refused.

“The Proposal will therefore generate incremental social and economic impacts from taking up land otherwise intended for a publicly exhibited and adopted purpose,” said the report. “The Site is therefore not suitable for the Proposal and the Proposal (being located at the Site) is not in the public interest.”

Despite this recommendation, the data center will still go ahead. This week, the Albury City council this week voted 6-1 to grant consent for Leading Edge’s development, according to meeting minutes.

Leading Edge had a busy start to the year in NSW. In late January the company opened its data center in Newcastle, Greater Newcastle; and filed development applications for an AUS$1 million ($760,000) data center at Coffs Harbour airport enterprise park on the North Coast and an AUS$11 million ($8.37 million) data center in Dubbo, Orana.

In late March the company was granted development consent by Bathurst Regional Council to construct a data center in the city, located in the Central Tablelands.

“The data center will expand connectivity options in the Bathurst region, which will empower everything from the consumer to local businesses,” said Thorpe. “It's a platform for new and existing business to drive growth for the region, while also taking the reliance off the need to live in Sydney to access vital IT infrastructure.”