AMD has reported record growth in its data center business, a few days after its larger competitors - Intel and Nvidia - spooked the markets with flagging sales figures.

The company, which previously struggled to make a dent in the enterprise market, reported revenue increase of 8.5 percent in its computing and graphics segment, which includes server CPUs, reaching $986 million for the year. 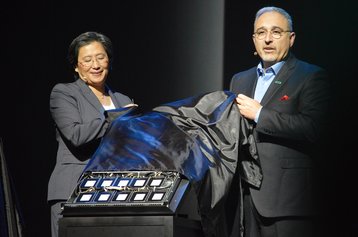 "Importantly, we more than doubled our Epyc processor shipments sequentially and delivered record GPU data center revenue in the quarter.

"Despite near-term graphics headwinds, 2019 is shaping up to be another exciting year driven by the launch of our broadest and most competitive product portfolio ever with our next-generation 7nm Ryzen, Radeon, and Epyc products.”

Back in 2017, DCD attended the launch of Epyc server CPU range, where we interviewed Su. AMD staff were celebrating the announcement, which caused the company's share price to hit $14, but the revelers wanted more, chanting "twenty dollars" in unison. Following today's earnings release, AMD shares trade at roughly $21.50.

But the results were still a mixed bag - just like Nvidia, the company is facing the crash of the cryptocurrency market, and the general global economic turbulence that has depressed enterprise and consumer spend.

And, while it did not reveal shrinking data center sales like Nvidia and Intel did, this is partially down to the fact that it is easier to show growth in a division with a small market share.