Amazon and Microsoft invest in company injecting CO2 into concrete

Amazon and Microsoft have invested in a company that reduces the emissions of the concrete industry, by injecting the waste CO2 into the mix.

CarbonCure hopes to remove 500 megatonnes of carbon dioxide annually from the concrete industry by 2030. It already has at least one customer in the data center industry: Compass Datacenters. 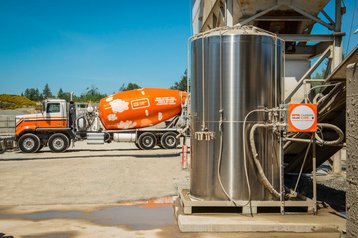 CarbonCure injects a precise amount of CO2 into wet concrete mixes to form Calcium Carbonate (CaCO3), which makes the structure stronger - and does not turn back into CO2 if the building is destroyed.

Other investors included Microsoft, BDC Capital, 2150, Thistledown Capital, Taronga Ventures, and GreenSoil Investments. The terms of the investment were not disclosed.

“This collaborative investment by technology and property development firms is a great endorsement of CarbonCure as the go-to CDR solution for the growing tech construction space and the overall shift towards low embodied carbon construction materials,” said Robert Niven, CEO and co-founder of CarbonCure Technologies.

“We witnessed the tech industry setting climate change trends with their adoption of renewable energy sources like wind and solar. This investment in CDR signals a broader change for public and private infrastructure projects as industries and governments turn their focus toward the reduction of embodied carbon."

Amazon said that it planned to use the technology in its buildings, including its upcoming HQ2 in Virginia. Microsoft was less definitive about whether it would use the concrete in the near future, just saying it would "help us meet our goal to be carbon negative by 2030.”

Some way to go

Although CarbonCure reduces emissions, it doesn't cancel out the emissions of concrete, from what DCD has been able to determine, as the amount of CO2 sequestered is dwarfed by the amount that has been produced in the creation of the concrete.

CarbonCure's site promises that about 30 standard concrete blocks can together sequester 1lb (0.45kg) of CO2. As a standard block weighs about 16kg, this works out at roughly 1kg of CO2 sequestered per tonne of concrete blocks.

However, it seems that making that tonne of blocks, will have produced more than 70kg of CO2. The Sustainable Concrete Forum reports that the concrete industry has reduced its emissions over the last ten years by something like 16kg per tonne, but the current target is around 72 kg per tonne.

Any fractional change in the emissions of concrete is very important, as the cement industry is responsible for generating up to eight percent of global greenhouse gases each year - which is more than aviation (2.5 percent), and more than the rough estimate usually given for emissions by the equipment which is housed in data centers.

CarbonCure already counts at least one data center company among is customer base, with Compass Datacenters announcing its plans to use the company's process this May.

"We estimate using CarbonCure will reduce our CO2 footprint by an average of 1,800 tons per campus," Compass CIO Nancy Novak said at the time. "That's the equivalent CO2 sequestered by 2,100 acres of forest or driving a car four million miles"