CyrusOne explains how to launch a data center quickly

In the classic 1994 film Speed, Keanu Reeves must keep a bus above 50 mph (80 km/h) or it will explode. With data demands rapidly growing, and hyperscalers' appetites increasingly insatiable, data center construction can feel just as terrifying. You need to move quickly, while trying not to crash.

“Every day we can save, every hour we can take off a project, matters - if we can get the product into the customer's hands sooner, it means more money for everybody.”

It’s an obvious point: the sooner companies can use their data centers, the sooner they can benefit from them. But it’s not an easy thing to manage - we’d all like to be faster at what we do, but some things just take time.

This feature appeared in the April issue of DCD Magazine. Subscribe for free today. 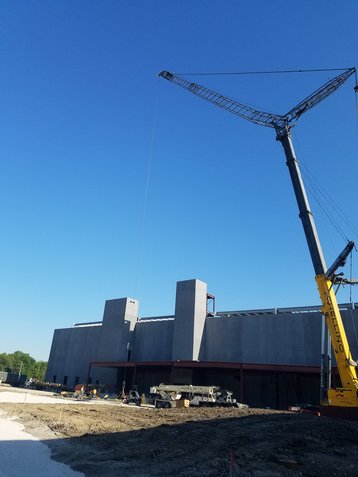 For CyrusOne, the trick has been to try to move the slower things away from the construction site. Using what it calls a ‘Massively Modular design’ “enables CyrusOne to commission large data center facilities in approximately 12-16 weeks, which is virtually an industry record,” Laramie Dorris, VP of design and construction at the US-based company, told DCD.

Take its Sterling II data center in Northern Virginia, which was built in 180 days. “A normal data center building has tilt-up concrete walls, which are cast on-site at the construction site,” Dorris said.

“But for Sterling II, we set up a separate off-site facility where we could cast pre-fabricated concrete wall panels. We then brought those panels to the construction site on trucks and used them to set up the data center building. It saved time because we didn’t have to stop work at the building site while the concrete walls were being cast.”

Elsewhere, the company “set up another off-site facility where we could assemble modular power units. Each unit included an uninterruptible power supply, a backup generator and a utility transformer, all housed in weatherproof containers.”

CyrusOne brought the modular units to the site “and set them up in ‘lineups’ outside the facility. Using modular power units speeds up construction, saves money and reduces the building’s footprint because we don’t have to build additional rooms inside the data center to house power equipment.”

To shave further days off the schedule, Durvasula said, the company keeps "inventory available and in many cases pre-ships inventory to destination" ahead of starting work. "When we anticipate something happening we'll get stuff to the site beforehand - even if we're in the midst of a negotiation." 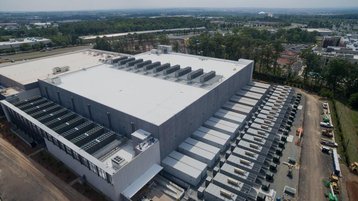 We visited the Sterling campus last year (see the magazine for more from the junket) and were given a tour by Stuart Dyer, the REIT's business development manager.

In this case CyrusOne used a 60,000 sq ft (5,500 sq m) pod, but it also has a smaller design, half the size. "Typically, what we do is we build one large structure, and then we build out pods within that structure," Dyer said. "Then we use the same generators, the same UPS systems, the same air handlers, the same PDUs across our portfolio. Having that rinse and repeat process, it's elegant."

It is here the company has to be careful. Standardization allows for speed, but it can risk slowing innovation and preventing customization. "So somewhere between 70 and 75 percent of [the design] we're going to keep standard," Durvasula said, with the rest used for innovations learned from previous constructions, acquisitions, or customer requirements.

For example, people's expectation of physical security has changed, Durvasula said: "People are expecting concentric security, border perimeter security, both audio visual biometrics and then component-level security. And then, very strict policies around that - so you've had to adjust your systems, your monitoring, your policies and procedures to accommodate that. Even the size of your lobby, you can't have people milling around there anymore so you want to be able to get them in and out."

For Durvasula, it is about finding the balance between changes and standardization. "Customization is the enemy of scale, you've got to give some amount of customization, but [most of] what you're going to do is going to have to be standard."

Standardization also makes maintenance easier, he noted: "if a technician knows that every time he/she goes into our data centers, they're always going to have a nine foot clearing - not six feet in one market and ten feet in another - that makes it a lot easier to say 'yes I can schedule seven chillers per hour, per day and I can be done with that whole site in two days.'”

Previously the company's chief commercial officer, Durvasula is now heading CyrusOne’s push into Europe, building upon its acquisition of Zenium, and the creation of greenfield sites.

There, the company is facing the usual local and national regulatory hurdles that define different nations: "Just generally speaking, I would say as you move further south in Europe it gets a little more complex. It takes a little bit longer in Spain than it would in Paris than it does in Germany than it does in London.

"Language barriers and cultural barriers aside, the rules of each country are very different and we're working with all of our advisors and partners to make sure that we understand them as best we can. The rules are different here, but you have to play by them."

One thing that is not different is the demand for ever faster speeds. Mainly targeting Fortune 1,000 companies and the hyperscale giants, CyrusOne expects its European customers to mostly be the same as its US ones.

"The customers definitely won't give you years to finish their project because they're anticipating the capacity,” Durvasula said. “They typically will give you somewhere between 60 and 120 days. And after 120 days, just based on the sensitivity of that business and how intense they are about negotiating that point…” he trailed off.

After 120 days, perhaps it is time to get off the bus.

Peter Judge contributed to this report.