Conservative councilor calls for enquiry, while CPRE is "astonished" Havering Council has backed the scheme

Environmental group CPRE has promised to fight proposals to build a 600MW data center campus on East London's green belt in Havering. The plan also faces opposition from within local government, with a councilor calling for an inquiry.

Havering Council has backed plans to build the so-called ‘London Data Freeport,’ a £5.3 billion ($5.97bn) project on land in North Ockenden and Upminster, currently designated as "green belt" where development is normally prohibited. The Campaign to Protect Rural England (CPRE) says it is "appalled" at the scheme, and the leader of the Council's Conservative group has called for a public inquiry into the plans. 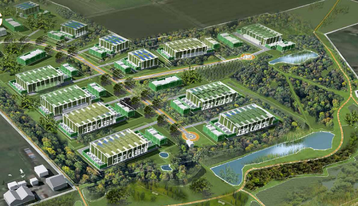 “We are astonished and appalled the council has agreed to sink valuable time into developing a proposal which will cause massive environmental damage and is highly unlikely to gain permission," said Alice Roberts, CPRE’s head of campaigns in a statement to The Telegraph.

The 175-hectare campus proposed by developer Digital Reef is planned close to Junction 27 of the M25 motorway, on the corner of Fen Lane and Dunnings Lane near Upminster. The site is 15 miles east of London's established Docklands data center hub, and two miles from Upminster's railway stations.

The council, which has approved and endorsed the proposal, says the project will be “nationally significant” and create 1,200 jobs, arguing that building it on green belt land is justified by “exceptional circumstances.” The application says it could be “a cornerstone” of the UK Government’s new focus on sovereign data. No potential customers are named in the application.

Havering Council is currently run by a coalition of the Havering Residents Association and the Labour Party, which has a narrow majority over the Conservative Party, the largest single party with 25 of the 54 seats. Planning and regeneration lead Cllr Graham Williamson (Residents Association) said the center would “attract high-tech jobs and businesses” and "transform" the council’s income, raising about £12 million in business rates, speaking after a November 9 cabinet meeting, reports local democracy reporter Josh Mellor.

The leader of the council's Conservative group, Cllr Damian White, has called for a public inquiry, acknowledging the proposals are a “significant opportunity” but raising questions about the use of green belt land.

“Whilst delivering significant inward investment for the borough, how will residents right across Havering benefit from the loss of hundreds of acres of green belt land?" he asked in a statement to the Local Democracy Reporting Service.

“This should form part of a wider debate on the upcoming update of the local plan," said White. “Rushing ahead without reallocating the land through an open public inquiry would be the wrong route for this type of development to be achieved.”

Leader of the Council Ray Morgon (Residents Association) said the plan would "bring back land into public use which is not currently accessible," saying the council was still committed to green belt land, but "these are exceptional circumstances, we’d be using the benefits of the land without any loss.”

The rates income could be larger than the £12 million quoted by Cllr Williamson, and perhaps as large as £40 million, Newsquest says, if the center becomes part of Thames Freeport, a new economic zone where normal tax and customs laws do not apply.

The proposed project site sits within the outer boundary of Thames Freeport, which was announced in the UK Government's 2021 budget, and intended to promote the "leveling up" of deprived areas in Essex, East of London. Havering Council has applied to have the project included within the Freeport zone, which would enable the council to keep 100 percent of the business rates levied on it, reports Mellor.

Digital Reef has also offered the council a one-off £9 million payment if construction starts by 2024 - a date which, Newsquest's Josh Mellor points out, can only be achieved if the council gets the planning process accelerated through a Local Development Order (LDO) which must be approved by a central government minister.

While Digital Reef is quoted as the developer, the name given in the application documents is the Reef Group, better known for retail, leisure, hotel, workplace, and residential projects.

Digital Reef appears to be an offshoot, founded by Reef Group’s chief executive Piers Slater and Jeff Thomas, an executive who previously founded Ark Data Centres, according to Companies House. Ark has data centers in Ealing, Farnborough, and Wiltshire, with others planned.

The proposed data center is described as a “Zero Carbon facility” with the developers promising on-site renewable power generation, along with battery capacity to balance the grid. The site will also collect waste heat, to be used in vertical farming, and include an "ecology park."

Space Park Leicester, the University of Leicester, and the Earth and Space Sustainability Initiative project have all signed up to support innovation in zero carbon energy, digital infrastructure, and the monitoring of agricultural and other land use activity on the site.

All these activities would be credited against the emissions associated with the data center facilities.

The 600MW capacity is significant as it more than equals the total data center capacity in the London hub. The site is close to the Warley Substation, which Reef says can be expanded to provide power for ten 50MW and five 20MW units, adding up to the 600MW total. The project would include around 330,000 sqm (3.55 million sq ft) of new data center floorspace, which would be built over a five-year construction period from 2023 through to 2027.