Covid and supply chain delayed project, but company back with new financing and amended plan

A $1 billion data center and fuel cell development in Connecticut could be back on track. After delays due to Covid-19 and supply chain issues, the company behind the project has secured new financing and come back with amended plans.

First announced in 2018, Energy Innovation Park, LLC (EIP) planned to build a 20MW fuel cell grid in a 465,000 square foot factory formerly occupied by Stanley Black & Decker on Myrtle Street, New Britain, eventually expanding to 44MW. The company planned to build a data center in the main factory building during a second phase of development once the cells were online. 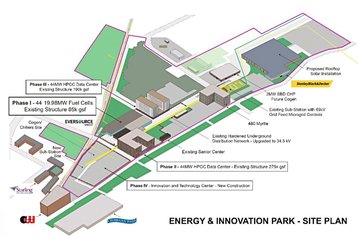 The project in Hartford County was granted more than $55 million in tax breaks in 2019, but EIP and New Britain Mayor Erin Stewart said the global shutdown in the first months of the pandemic followed by international supply chain disruptions stalled the progress for almost two years.

The Hartford Courant reports that EIP LLC has changed financing, brought in a different fuel cell supplier, and rewritten the plan for where it will operate its energy production equipment, but plans to begin work on the project this year if regulators grant sign off.

“I’m still holding my breath for the next 60 days until those regulatory approvals go through, but once that happens all signs point to go,” Stewart said this week. “It’s on the positive path now. I feel confident saying that this is the most promising news we have had in 24 months.”

The company has reportedly lined up new investors, and rather than retrofit two old Stanley buildings behind the main six-story factory, it will raze them and store the fuel cells outdoors on a 4-foot-high, 48,000-square-foot platform. EIP’s data center is still planned after the initial fuel cell deployment.

EIP planned to use 45 fuel cells from Doosan Fuel Cell America. Now the company has said it has replaced Doosan with California-based Bloom Energy as its fuel cell supplier. Bloom cells have been deployed at Teledata facilities in the UK and Equinix data centers in the US.

EIP is asking the siting council and public utilities regulatory authority to extend its permits, which had anticipated 2020 construction. The first phase of the fuel cell project – expected to be around 73 fuel cells, each roughly 30 feet long, 4 feet wide, and 7 feet high – could start later this year and would be operational by mid-2023.

The Siting Council will issue a decision by next month, and Stewart anticipates that the utilities regulatory authority will follow fairly soon after that.

"I am committed to dragging this across the finish line!" Mayor Stewart said on Facebook.