A closer look at the prosumer approach, with Eric Lamendour of Engie

With data centers playing a pivotal role in the world’s transition to digital, every year, IT infrastructure operators need to adapt to the steady and constant growth in digital demand, and as a result, the steady growth in energy consumption.

To keep pace with this digital growth, major digital operators have been undertaking ambitious actions for several years aimed at achieving carbon neutrality and Engie is no different.

With a focus on green data centers and ensuring it contributes to the performance of digital infrastructures as part of a carbon-neutral trajectory, Engie has made several commitments to sustainability, including having already installed 34.4GW of renewable capacity, with the goal to reach 80GW by 2030.

The company has also implemented 23GW worth of low carbon distributed energy infrastructures (including DHCs) with an aim to push this to 31GW by 2025, as well as 4GW of green H2 capacity by 2030. But why are these sustainable commitments so important?

The most common way for data centers to have the electricity they need to function is to simply be connected to their local or national power grid. 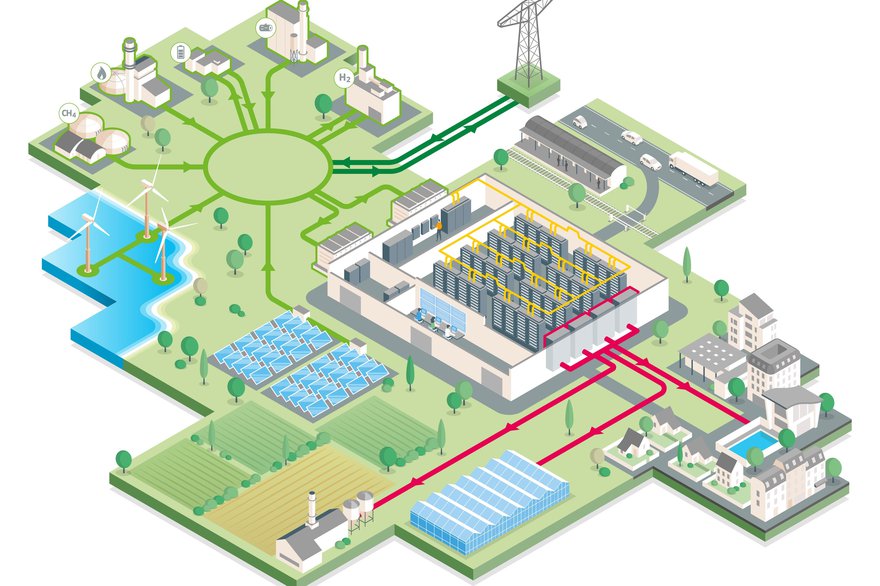 Depending on the country, these grids will provide them with electricity created by an energy mix they won’t master, however green they want to be and no matter how eager they are to reduce their carbon footprints.

This simple truth – that data centers mainly rely on the grid to get energy – is also the clear reason why all of them have to install backup energy too. Matter-of-factly, there is no grid reliable enough to match the availability requirement for the highly critical activity of any data center – simply put, no grid is on 100 percent of the time.

And, each time there is a shortage of electricity, it takes no more than 20ms for servers to stop functioning, crashing the IT production that is the data center’s mission.

This technical constraint explains why electrical backup has to include inverters and batteries – to provide backup without breaking first and giving the main backup (generally based on diesel backup power generators) the time it needs to start and function properly.

So, even if grid outages are quite rare indeed – and particularly in modern, developed countries where data centers are more likely to be found – they are still the only reason such heavy investments are made on energy assets. Data centers simply cannot suffer power interruptions – not even the possibility of them.

Therefore, for years, data centers have invested in their on-site generation with UPSs. Those energy assets have been and still are a real burden from an economic standpoint.

Firstly because of the large amount of CapEx they engulf and, secondly, because of the OpEx needed for their maintenance. These assets are also part of a larger challenge that is a boiling hot topic now: sustainability.

Each time there is a shortage of electricity, it takes no more than 20ms for servers to stop functioning, crashing the IT production that is the data center’s mission Engie

How can data centers alleviate their carbon footprints and head for a greener way to function with these diesel engines as the only energy backup solution?

Over the last two decades, data centers have dealt with energy this way – a combination of grid electricity for affordability and emergency diesel generators for reliability – and there were no alternatives.

But those times may be over.

Because what data centers are seeking is a reliable dual feed to create 100 percent availability for IT production, and it can now be done in a totally different way.

Data centers can now access an energy prosumer model, where energy assets are positioned within a micro grid operated by an energy provider knowledgeable on energy market trading and thus enabling an effective integration between the micro grid and the larger grid.

In this disruptive new model, energy assets – both those used to get and distribute the main source of energy and those needed to secure backup energy – are positioned within a microgrid. This microgrid is conceived and built by an energy provider.

Depending on the possibilities of the location, and accordingly the specific requirement of the data center, the microgrid would include sustainable energy productions, such as photovoltaic panels, wind turbines, or even aggregate systems based on hydrogen, or biomethane.

Switching to this prosumer model offers more than one benefit for data centers.

For data centers – inside specific power purchase agreements – it is also an elegant solution to reach carbon neutrality by supporting the global effort toward sustainability.

The dual feed inside the microgrid also guarantees high availability – two energy sources provide both primary and emergency power to the data center.

And even if the microgrid is first created to answer only the data center’s needs, it also becomes an active component of the larger grid, contributing to resiliency and the transition toward renewable energy.

With this approach, data centers stay focused on their critical mission: the IT production. The energy specialist is the one to take care of the microgrid – from conception, through the build, and during operation and maintenance – in exchange for a negotiated fixed price.

Energy production is carried out in accordance with the needs of the data center and based on the primary source of energy available: gas, solar, or wind as an example.

The prosumer model is also an easy way to answer the increasing demand for transparency and control regarding the energy consumption and sustainability measures of data centers.

This disruptive model offers data centers access to renewable energy, both for their primary and emergency needs.

For this, data centers are requested to use some CapEx to create the dedicated dual-feed microgrid and then to pay for the energy they consume. By doing so, they secure both the reliability and availability to deliver IT production with green energy.

All in all, data centers investments not only bring them further on their transition to carbon neutrality, but it also makes them a key player to help their local community do the same.

But that’s the beginning of a whole other story.