The hydrogen economy: Data centers of the future

Is the solid oxide platform the world’s answer to accelerating hydrogen adoption? We sat down with Bloom Energy to find out more

What the world needs now (apart from love, sweet love) is a viable, long-term energy solution. With fossil fuels a finite resource, most renewables highly intermittent, and batteries ineffective for extended periods of time, many believe the answer lies within the universe’s most abundant element: hydrogen. Green hydrogen, to be precise.

Amongst electrolyzer technology, solid oxide is widely recognized for its potential to generate green hydrogen at the lowest cost, particularly when pitted against PEM (proton exchange membrane) and alkaline electrolyzers.

This is largely due to the superior efficiency and scalability of solid oxide electrolyzers, as well as their rapidly declining costs, according to Jack Brouwer, director of the National Fuel Cell Research Center at UC Irvine.

Amongst electrolyzer technology, solid oxide is widely recognized for its potential to generate green hydrogen at the lowest cost Bloom Energy

With 66 countries across the globe currently committed to net-zero targets in the coming decades, it’s clear we need a clean, flexible answer to energy. The EU has already committed to build 40 GW of electrolyzers this decade, an investment of roughly €24B and is considering importing another 40 GW from countries like Morocco which benefit from lower hydrogen production costs.

Governments are increasingly recognizing the need for hydrogen too, to complement renewable power and plug the gaps left by their intermittency. In terms of renewable power serving as the electricity input used to produce green hydrogen, some of the largest electrolysis deployments have been linked to dedicated renewable projects.

On the other side of the world, a new Green Deal in Korea has seen the country commit to 200,000 hydrogen powered vehicles, as well as 450 refuelling stations by 2030. Elsewhere, programs such as California’s Low-Carbon Fuel Standard have spurred early momentum in the US, with the Biden administration vying to make hydrogen a key element in its fight against climate change, as well as playing a key role in decarbonization.

And as hydrogen’s market momentum continues to build – with a 20-fold increase in announced projects over the last 18 months globally – could green hydrogen finally be the holy grail we’ve been waiting for?

Combining the advantages of scalability and flexibility, with higher production efficiencies thanks to a supply chain that relies on readily available materials, Bloom Energy has established itself as a global leader in solid oxide technology with its power generation unit, the Bloom Energy Server, deployed at data centers, hospitals, retail locations, and even reaching utility scale.

This solid oxide technology would later form the basis of Bloom’s core Energy Server platform, with demonstrations in 2005 producing both hydrogen and power. At the time, there wasn’t a sufficient market for hydrogen, so Bloom systems initially recycled the produced hydrogen back into the system to boost efficiency and reduce emissions, a mode Bloom’s fleets still operate in today.

That said, the rapid improvements across the hydrogen economy are beginning to facilitate real solutions at scale. Solid oxide offers many competitive advantages across a range of hydrogen production scenarios, for example, utilizing excess renewables or integrating with large sources of steam from industrial processes and nuclear reactors.

This kind of flexibility has the potential to open doors to several global end-use markets that might have previously been off-limits, including steel and chemical manufacturing, long-haul transportation and wholesale power, to name but a few.

Hydrogen isn’t a readily available substance on Earth, it requires a primary input energy source to be produced. The traditional way of doing this uses fossil fuels.

Green hydrogen, however, can be produced via electrolysis, which uses zero-carbon electricity to split water at the molecular level into hydrogen and oxygen, through a device called an electrolyzer.

Unlike PEM and alkaline electrolyzers that predominantly rely on electricity and water to make hydrogen, Bloom Electrolyzers can substitute a good proportion of electricity with steam Bloom Energy

Since the cost of electricity can account for up to 80 percent of the total cost of hydrogen production, maximizing efficiency is the key to unlocking affordable green hydrogen.

Turning up the heat

The electrical energy required to produce hydrogen changes with the temperature of the input water. Solid oxide technology is capable of utilizing steam as an input, which creates a critical advantage when it comes to cost-effective hydrogen production.

The Bloom Electrolyzer operates at high temperatures of between 700 and 850°C, using solid oxide electrolysis cells (SOEC) as the catalyst for a reaction. The heat serves as a secondary source of energy to help this happen, significantly reducing the electrical energy requirement and associated costs.

Unlike PEM and alkaline electrolyzers that predominantly rely on electricity and water to make hydrogen, Bloom Electrolyzers can substitute a good proportion of electricity with steam.

With several governments having already announced explicit hydrogen investment targets, subsidy schemes and regulatory frameworks, it’s clear that there is a seat at the table for green hydrogen. 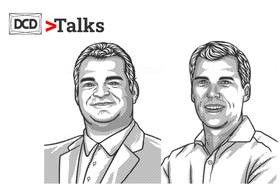 Jamie Funk, Head of Sales for Verticals at Bloom Energy and Pete Sacco, Founder and President, PTS talk to Dan Loosemore of DCD

Companies like Bloom are working hard to make hydrogen a viable and affordable asset for all, with the view to make this technology cost-competitive in the future. After all, access to abundant, clean, reliable power should be a necessity available to all, not just those with the deepest pockets.

For data centers, hydrogen can be utilized as a zero-carbon fuel for reliable onsite power production. Using fuel cells paired with hydrogen puts data centers in control over their decarbonization targets, while simultaneously improving their overall power reliability and ensuring predictable costs.

When thinking about the data center of the future, we think about unparalleled levels of reliability, a zero-carbon footprint, and predictable and low costs. Hydrogen is making a case that it can deliver on all three of these necessities.