Schneider to install IoT across all its manufacturing sites, but needs to use 5G, cloud, edge data centers and SDN to support that drive

Schneider is planning to deploy 5G across all its factories and other facilities to support the roll-out of IoT technology, while shifting 90 percent of its overall IT infrastructure into the cloud.

“Overall, Schneider has about 1,000 locations. Out of that, we have anywhere from 350 to 500 manufacturing and distribution centers. The rest are sales offices and other back-offices,” Zach Nimboorkar, Vice President of Global IT Infrastructure and Operations at Schneider Electric told DCD CEO George Rockett in a recent DCD>Talks video. 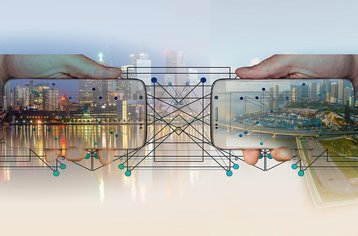 With so many manufacturing sites, there are always assets depreciating and requiring investment, Nimboorkar told Rockett – plants stuffed with conventional IT that needs to be updated. “If you want to talk about modernizing infrastructure, that’s where the ‘industrial edge’ comes into play. Because now we’re living in a world of hybrid computing, with cloud and other IT resources that need to be really close to our manufacturing lines.

“So what we’re trying to do is leverage edge computing and also 5G, connecting 5G to our IoT platform within the manufacturing facilities to do that hybrid connectivity, whether it needs to be connected to the traditional data centers or cloud. There’s quite a bit of excitement [at Schneider] about that, and we’re working on several different strategies. Depending on the use cases, that could be huge,” said Nimboorkar.

However, he admitted, as traditional IT merges with operational IT, security will be an issue. “The traditional IT space never really merged with the operational technology space. They remain two separate entities. The way we are bringing these two together is via segmentation. From a security standpoint, we use firewalls to separate the two spaces.

If you want to talk about modernizing infrastructure, that’s where the ‘industrial edge’ comes into play Zach Nimboorkar, Schneider Electric

“But on the operational technology side, because there’s a lot of IoT-enabled infrastructure, we need to connect them to the internet. How do we do that in a secure fashion? By segmenting the IoT-operational technology space, putting some security measures in the middle of both IT and the OT. And we’re able to secure all the endpoints that are sitting on the OT side and get them connected to the internet,” said Nimboorkar.

For people working on the operational technology side, though, the security posture required may be new, he added, with IT likely to take the lead in pushing through policies that give a higher priority to security.

“That's where there was a lot of contention. But now, I think, IT is providing the capabilities for the operational technology space,” said Nimboorkar. The two ‘sides’ have to work together because OT requires fast, real-time connectivity, with IoT devices that can only be efficiently connected via software-defined networks (SDN), with 5G for broader connectivity. In addition to provide the technology to do all this, IT also has to ensure it is secure.

Furthermore, pointed out Nimboorkar, one of the key enabling technologies behind IoT – one that has been relatively little talked about – has been SDN.

“There wasn’t a lot of innovation until SDN came out, although SDN is basically DMVPN [Dynamic Multipoint Virtual Private Network] on steroids… With the hybrid model of edge computing, and then also cloud computing, we are able to help our business business units to be much more agile in terms of where they place their workloads. They don't want to deal with the connectivity, so we are here to help them with that.

“After SDN, came 5G. Again, this is not just a buzzword. I believe that we are close to leveraging 5G even for our field locations. But what I'm most excited about is leveraging 5G technology to replace traditional network capabilities, like MPLS [Multiprotocol Label Switching] and broadband.

“Some of the locations we have, always need to be on, so right now we’re leveraging 4G to do backup. With the increased speed and density of 5G, we will be able to expand that into our manufacturing plant.

“That’s primarily from a connectivity perspective. From an infrastructure standpoint, as I mentioned earlier, we are are looking to exit from many of our traditional data centers to migrate as much as possible into cloud and leverage colos to provide hyper converged infrastructure.

“If, one day, I want to move workloads from the cloud to a colo, I can easily do that with layer two extension of hyper-converged infrastructure. And if cloud becomes less economical in future, then I have the option of moving those workloads to a colo, or to any of the edge data centers that we may have.”

As a result, suggested Nimboorkar, “We could have workloads anywhere, any place, and have anyone connect to them from our internal Schneider Electric ecosystem more efficiently.”