Climate change: Who's impacting who?

It is, of course, both. In the data center industry, we spend an awful lot of time worrying about climate, and for good reason.

But while a vast amount of time is spent thinking about how we can mitigate the data center industry’s contribution to climate change, we must also consider the direct impact that the climate crisis has on us: our facilities, and as an industry.

In our latest DCD>Talks with Schneider Electric’s Anna Timme, she outlines what she thinks the three biggest challenges climate change brings with it, and how this will impact the industry's ability to work against it.

“We have seen record droughts across the globe, especially over the past year,” says Timme. “First, data center operators are going to start having trouble establishing new facilities in areas where there's competition for those local water resources.

“In the US Arizona is a hotspot for data center development, but in local municipalities, they are passing ordinances that allow them to turn down requests for water withdrawals if they don't feel that they're aligned with the local priorities.

“The same thing is happening around this country and around the world as local communities, understandably and rightfully, become more protective of their natural resources.”

These ordinances, and concerns surrounding water consumption, are not unwarranted. In August this year, DCD reported that Microsoft had used 84 million liters of drinking water in the last year alone in Holland, a country which at the time was facing severe drought.

This massive use was mostly due to the company’s use of water-based cooling during hotter temperatures, a much more energy-efficient cooling method than traditional air cooling.

Drought also affects energy production itself. Hydroelectric power is a popular renewable energy source, but one fundamentally reliant on water.

“In the West, we're watching massive lakes like Lake Mead and Lake Powell dry up, which could lead to potential shutdowns of these massive iconic dams such as the Hoover Dam and the Glen Canyon Dam. So our customers are telling us that power availability has become a major driver in determining whether to build.” 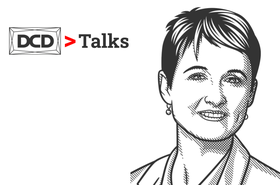 Water shortage is not the only side-effect of climate change that is wreaking havoc on data centers. Extreme heat, and by extension extreme weather conditions are having a dramatic impact.

“Data centers are designed for a particular cooling load based on the local climate,” explains Timme. “So as those annual heat records are surpassed not only once but again and again and again, many data centers are running into problems. If we look at London last summer, there were several major data center operators that had outages related to the failure of their cooling systems.

“Severe weather can also affect data centers, both by causing utility grid outages, of course, but also by potentially causing damage to the facilities themselves. We've seen numerous examples of this over the past couple of years, including floods, hurricanes, deep freezes, and wildfires as well.”

Wildfires do not even have to occur to cast a shadow. It is expected that in California, preemptive power outages will be staged in order to stop wildfires from commencing in the first place.

In the end, what we can undoubtedly see is that it is not enough to merely attempt to improve energy efficiency. As Timme says: “The industry really must continue the quest for new solutions that will make infrastructure more resilient to the effects of climate change, while also working hard to combat it.”

Watch the DCD>Talk to find out more