Balance of power: How data centers can help stabilize the grid

Electricity companies need help stabilizing the grid, and data center operators could help – and make money – by offering the services of their UPS systems

“The energy industry is undergoing a dramatic change as renewable sources of distributed energy, decarbonization and demand increases are transforming traditional sources of energy,” according to John Byrne, head of operations, UK & Ireland, for Enel X, part of the massive Enel energy group. 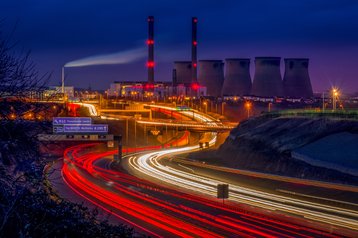 Coal-fired power stations in the UK are being phased out in favour of offshore wind – Tim Hill, Pixabay

While that is certainly a ‘good thing’ as far as carbon emissions and other environmental factors are concerned, it poses a number of new challenges for energy companies and grid operators. Instead of a model whereby large coal, gas or nuclear power stations produce multi-gigawatts of power, production is becoming more widely distributed, yet also much more variable.

“This poses significant risks to grid stability. And, as a result, there's an increased likelihood of frequency deviations… frequency is a real-time changing variable that indicates the balance between energies applied to the grid and energy demanded by its consumers,” explained Byrne, in a presentation at DCD’s recent DCD>Grid Scale event.

And it doesn’t require the frequency to vary by much – less than a percentage point either way – to wreak havoc. In the US, the frequency needs to be maintained at 60Hz, but in the power crisis in Texas in February, with electricity generation suddenly disappearing off the radar, the grid was within a whisker of a total shutdown.

In Texas, should the grid frequency drop below 59.4Hz for just nine minutes, generators are automatically tripped out; and should it go below 59.3Hz then ‘under frequency load shedding relays’ will automatically kick-in to reduce load. During the crisis in February, the Texas grid came within 0.002Hz of an automatic shutdown.

While that was driven by unexpectedly bad weather, frequency deviations are becoming a real and challenging issue for grid operators, who are now seeking ways to better maintain stability.

One way they have done this in the past has been by maintaining backup generators, which can be spun up or down accordingly. While that worked in a world of planned downtime for major power stations, backup generators are not responsive enough for a grid reliant on the sun shining and the wind blowing – they need the kind of instant response that data centers get from their UPS systems when workmen sever a critical power cable.

Conference Session UPS’ are now enabling revenue-generation. Can you benefit from demand response?

And such ‘grid balancing’ could be provided by UPS owners making better use of a barely used asset. “Data centers are the ideal candidates to help implement grid-balancing services,” said Byrne.

It’s not just a theoretical proposition, but one that is already possible as a built-in mainstream function of UPS products and services. And the amount that data center operators could earn is not insignificant. Byrne suggests that they could be able to earn six-figure incomes by dual purposing their UPS infrastructure in this way.

One megawatt of battery backup offered by data center operators to grid infrastructure companies could earn as much as €100,000 every year, according to Byrne. These are the kind of numbers that could add up to millions for a company with multiple multi-megawatt data centers with backup batteries standing idle for much of the time.

The opportunity is there, he said, because UPS backups are vastly under-utilized – while an essential part of the data center, their main role is as more of an insurance policy, rather than an item of infrastructure to be sweated.

We have added demand management, fast frequency response and a number of other services to the UPS Arturo Di Filippi, Vertiv

Engineer Arturo Di Filippi is Vertiv’s global offering manager for large power systems. He has been working on the development of the technology at Vertiv and, therefore, has an in-depth understanding of how it works.

“The primary function of the UPS is still to protect the load,” said Di Filippi. “The UPS has to protect the critical load in any condition. But we have added these innovative features to our UPS products without compromising their main function.”

In addition to backup power and maintaining power quality, the standard functions of any data center UPS, “we’ve added demand management, fast frequency response and a number of other services to the UPS,” said Di Filippi. “This way, we have the flexibility to interface with an external grid controller and, at the same time, are able to go from one operating mode to the other mainly by relying on our control system and the way it is interfaced with the external controller and the battery storage system.”

Data center technology company Vertiv has been developing this feature for a number of years, and even run some pilot projects with major data center operators.

Now, with the push to decarbonize power networks set to intensify, data center operators will be able to make a major contribution to help out – while turning an essential part of their infrastructure into a money-making asset.

Byrne and Di Filippi provided a deep-dive into grid-balancing technology and how it will work at DCD’s recent DCD>Grid Scale event, now available to view on-demand.