Why revive the DCIM camel?

DCIM crashed in the middle of its hype cycle, but now smart data centers demand it be brought to life again

In March 2017, IT consultant Andrew Waterston claimed, in an article in DCN, that data center infrastructure management (DCIM) was a ‘Dead Camel In Motion,’ not delivering on its promise and due for replacement.

At the time, it was clear that DCIM was not delivering a return on investment (ROI) for end users or even vendors. Around that time, when the acronym DCIM was mentioned in conversations, people shivered, but some of us didn’t give up hope so easily.

Return from the dead 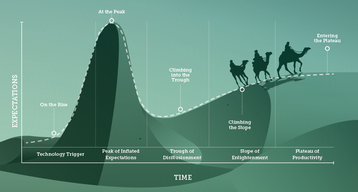 We believe DCIM has been on extended leave mid hype cycle, but now, it’s time to resuscitate the camel. It’s not dead – it just needs a little support in reaching its potential.

The industry is working hard to create true software-defined data centers (SDDC) or Smart DCs, but this requires an intelligent link, middleware connecting the facilities to the IT. How can we do this without DCIM?

We believe DCIM is necessary for an SDDC or a Smart DC, but accept that it’s not easy. We want to give DCIM a place and an identity that vendors can agree on, in order to drag it out of the trenches and revive its potential.

Many DC operators now have a functioning DCIM system and can show you how they implemented one of the larger product offerings, but it is normally a work in progress. DCIM isn’t dismissed out of hand any more: There are lots of live implementation programs out there actually starting to deliver real value.

In July 2013, Gartner positioned DCIM on its “hype cycle” curve, as slipping well into the Trough of Disillusionment, with a two to five year timeline to reach the Plateau of Productivity. But, by 2015, it was still in the same section, and left a sour taste in many wallets of DC owners, as it still wasn’t reaching its potential.

Now, in late 2018, DCIM has disappeared from Gartner’s watchful eye, with other technologies traversing the hype cycle path in its stead. So where has it gone? Does DCIM stand for “dead camel in motion” as Waterston suggested, or has it become something useful? Is it possible that DCIM has quietly become middleware for the SMART data center?

Broadly speaking, middleware enables a heterogeneous environment by bridging disparate applications and infrastructure. Whatever name we use, surely this is what our data centers need to become smart and to embrace the internet of things (IoT) and the industrial IoT.

The challenge is how to create a heterogeneous environment when these environments comprise a system of systems, that include, people, processes, software, hardware, integrations, communication protocols, plant, energy and cooling systems.

Middleware solutions are generally employed to minimize the pain of integration between IT systems, but in the data center, it must do more, simplifying the complexity, and facilitating problem-solving across the data center in a transparent, holistic, and logical manner. Moreover, it needs to be able to see the entire stack of architectures in order to align the various aspects of the business, technology and facilities, which famously have different financial horizons.

This means that finding a successful DCIM solution is not an easy puzzle to solve.

Fred Koh from Graphical Networks wrote recently that “the most accurate way to define DCIM is this: DCIM is in the eye of the beholder,” which doesn’t sound very promising, and he may well have a point. Every environment will always be slightly different from the next.

Koh argues that no single DCIM system should be fit for every organization, which leaves us back at the drawing board in terms of a single market definition. Koh highlights a couple of DCIM companies who have withdrawn from the market, and we have also seen some mergers and acquisitions.

We’re die-hard optimists though, and we see evidence that solutions are emerging. For example, this year, US industry analyst Bill Kleyman said in blog posts: “Data centers are getting smarter,” and “don’t think that AI, machine learning, and neural networks are only for cloud-minded DevOps people. You will see these solutions become deeply integrated with data center operations as well as management.”

So have we figured out what DCIM is yet, and has it found its place? If vendors still define it differently, then it can’t yet be classed as mature, and this may be one reason why it’s stuck in the quicksand of the trough of disillusionment.

The problem is that people’s DCIM requirements vary widely. Companies have a key client group who are their main income so they cater for those clients first. If they are all in one industry or business sector this particular DCIM implementation becomes tailored to that market.

In summary, there are three major shifts towards the smart data center.

As the wider IT group gets involved in DCIM and sees the advances that have occurred over the last few years, they can now identify where they could use this information to assist in change management, capacity planning and pro-active growth management. A proactive strategy will prevent reactive growth, and reduce risk because people have more time to plan properly and look for pitfalls rather than discovering them.

The smart DC is seen by some as a cost saving exercise, by others as a means to improve efficiency, but it could be so much more: A fully automated, connected and autonomous facility that can manage the physical elements of data center management as well as the connected software, using AI, a smattering of robotics and a bit of innovation. It will only take one adventurous company to pioneer this approach and we may see another sea change in the way data centers can be operated.

This was never an easy problem to solve, but DCIM is the first step towards delivering change management, incident handling, asset registers and other things.

This feature appeared in the October/November issue of DCD Magazine. Subscribe for free today: