Where will the Edge be implemented? For many people, it will be located at the telephone exchanges and cell towers which are close to end-users and devices

While the cloud made a virtue of abandoning specific geographic locations, the Edge is all about placing data and services where they are needed. But there’s an ongoing debate about where exactly that is.

DartPoints co-founder Loren Long said we shouldn’t fixate on where the Edge is: “Edge isn’t a geographical location, it’s not pointing at cell towers and saying ‘that’s the Edge.’

“Edge is an instance. It is the place where the compute and storage is required to be to get the optimal performance. That could be a cell tower, it could be further back.”

For Long, Edge computing isn’t new. He cites EdgeConneX, which deploys servers in conventional data centers across small cities for Comcast: “because that’s as far as Comcast needs to go.”

Schneider calls this the regional Edge, and says it is mainly used for high bandwidth content delivery and gaming - which Steven Carlini, senior director of Schneider's data center solutions division, describes as a very large market, and also one which is keeping the desktop computing industry alive.

The recent State of the Edge report proposes the four following principles to define the Edge: “The Edge is a location, not a thing; there are lots of edges, but the Edge we care about today is the Edge of the last mile network; the Edge has two sides, an infrastructure edge and a device edge; compute will exist on both sides, working in coordination with the centralized cloud.” 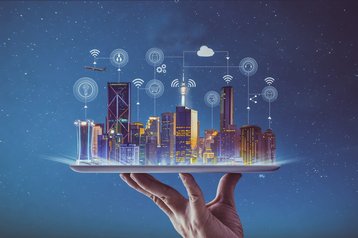 Others are less reticent about location. Several vendors are looking hard at cell towers, which are the confluence between the digital infrastructure and its users, both humans and connected devices.

Cell tower Edge installations need the characteristics of the traditional data center - high availability, power and cooling, overlaid with network hardware that is the traditional domain of mobile operators.

DartPoints is creating small data centers for just this niche. The company’s CEO Michael Ortiz says content providers and application providers will benefit from the so-called “telco Edge,” but the carriers will gain most, through new services like 5G, IoT and autonomous cars that “can’t live anywhere except the cell tower.”

Schneider agrees that the next aim of Edge computing is to move even closer to the users, which can be on-premise, at the base of cell towers, but also bringing in the fixed-line operators' facilities, so-called “central offices.”

Central offices were originally built decades ago by legacy telco providers to store analog telephony equipment. As the networks went digital, this was replaced by much more space-efficient digital equipment, leaving empty rooms with great power and networking, potentially ideal for local data center usage, or else using the CO as “a prime location to cache a lot of data.”

In the Central Office Re-architected as a Datacenter (CORD) initiative, IT and telecoms vendors aim to create definitions and standard platforms to make it easy to roll out data center services in these telecoms spaces, using technologies including software defined networking (SDN) and network function virtualization (NFV). The closely related OpenCORD aims to offer this as open source.

Central offices are set up in prime locations and have direct access to networks, “because they’re in the same building,” Carlini said. “So it’s kind of a win-win.”

“We see this happening either before or in parallel with the cell tower build-out,” which Schneider predicts will happen soon, even though Carlini admits we are not seeing a massive effort yet.

Caching data at cell towers, he said, will allow “5G to operate and deliver on its promises.

“Information is going to have to be cached within a community - a small area that’s going to share that data where the 5G network is going to operate.

Akamai is also considering equipment at the base of cell towers in the future - but this option is “more in an R&D phase right now,” explained James Kretchmar.

Specifically, the company is exploring the use cases that would make it worthwhile, and weighing the pros and cons.

How real is all this? Schneider’s Carlini says he’s seeing this model emerge, but as a “continuation of the build-out of 4G.” Until the successor, 5G, comes along, there will be no urgent need to cache data at cell towers or in central offices en masse.

“When 5G kicks in, that’s when you’re going to see a huge wave,” Carlini said. That’s a drawback, as the actual technologies 5G will be using are still being defined.

Despite this, there’s real activity now, he assured us: “From a Schneider perspective, there are actual projects that we’re working on now.”

In the long term, the arguments for cell tower and central office deployments are strong. The hurdles include developing the business model and sorting out ownership. In practice, building the mobile network Edge won’t be easy, but vendors persist in claiming it won’t present any problems.

DartPoints’ Long recalls pitches along the lines of ‘you put it out there and it solves all your problems.’

“But that’s ridiculous,” he laughed. “Nowhere in technology has anything deployed itself that easily, and especially something as complicated as the Edge because a lot of things have to change from the core out: all the networks, all the way to how routing cables are done today.”

Companies may not be willing to make these changes, because they perceive them as threatening their competitive advantage over one another.

“If you think about wireless carriers, AT&T, Verizon, Sprint, T-Mobile, they all fight about who has the best network. They see that as their unique differentiator.”

And so, he said, “when you bring compute, storage, content and applications to the Edge, that are now on a completely different backhaul network, the unique networks each of the carriers operate disappear, and the carriers are almost relegated to antennas, so they may not necessarily be that excited.”

If carriers were keen to adopt such a model, they would still need to collaborate with companies up and down the stack to define it.

First, Long said, businesses will need to stop “claiming” the Edge as their own. “In fact, it is very much going to be a micro ecosystem.”

Carlini concurs: “At the cell tower, there are multiple stakeholders. There’s the landowners, there’s the tower companies that actually own the enclosures that the equipment goes in, there’s the service providers, and there’s even governments that are involved, regulating what can and can’t go into these sites.”

Nor is there a standard process for deployment: “It’s not clear whether the equipment can go in the huts that they have there already or if there’s going to be prefab containers that we’re going to have to drop on site as an additional hut.”

The latter option - placing modules on the property beside the cell tower would complicate things more, he said, because “that’s when you run into a lot of these issues with government regulations and local jurisdiction on what can be there and what can’t. So that opens a whole ‘nother can of worms.”

In any case, such an upheaval will mean that many mistakes are likely to be made: “This applies to our level, the tower operators, mobile operators, all the way up to the content and application providers.”

Nothing is set in stone

Another potential issue is outlined by telecoms specialist Dean Bubley: the power capacity at cell sites might not be sufficient to accommodate much compute.

He argues that instead, device-based applications will offload workloads to the network, or cloud providers will distribute certain aspects of their applications.

The network Edge, he stated, will be the control point for applications like security, and as an evolution of content distribution networks, but nothing more. Most of the compute-heavy applications will either be processed on device or in the cloud.

Even content distribution specialist Akamai has its doubts: while cell towers and central offices may provide perfect locations for data offloading closer to users, and are being considered among “a number of different environments,” they have drawbacks, too: concessions on disk and storage space.

“In some of these locations you’re going to have a smaller amount of disk space available, or storage space available than you would have in other spaces, so you’d be making a trade off for ‘which content does it make most sense to have there, that would get a benefit from offload that a lot of end-users would be requesting’ versus if you were to make a step or two out, more like the traditional Edge of today, then you have more disk space available, and you can take other trade-offs into consideration.”

What such a business model would look like is still unclear, and this will be the company’s final concern once it has identified which use cases are worthwhile “from any combination of making the user experience better, making it easier for the network operators by offloading the network, and making it better for our customers in being able to do that.”

But physical expansion isn’t everything, and being in as many locations and geographies as possible is only one aspect of Akamai’s ambitions to improve its services; in parallel it is developing more efficient software to avoid having to multiply servers, despite increasing demand.

Rest assured, there is light at the end of the tunnel for the cell tower Edge.

Driving these decisions, he continued, will be the customers, all of whom are likely to have their own set of specifications to suit their needs. “Whether it’s Google, Microsoft, Amazon, Facebook, LinkedIn, Netflix,” content and application providers are most likely to “know where they need to go for themselves.”

Customers will require modular, tailored solutions to deploy capacity at the Edge. Depending on their purpose, the configuration, deployment, security layer and redundancy requirements will vary.

“The intent here is that our components may have similarities, but our solutions are very different.”

Long said cell tower applications are “most likely to be a smaller containerized modular solution.” But it’s not a single solution: “Not all cell sites are cell towers; they’re called buildings with antennas on top,” and different products might meet the need for data centers in storage rooms or office blocks.