In March 2020, Markus Giesswein was worried. He’s the co-founder of a thriving Austrian fashion brand, and he’d just started a six-month warehouse automation project to keep up with demand.

Then Covid-19 arrived. All the shops closed, and no-one went outside anymore. “We are an omni-channel business with 3,000 retail outlets and our own shops,” Giesswein told DCD. He feared he would end up with €3 million ($3.6m) of robots standing idle.

He needn’t have worried. The pandemic changed behavior, and his business actually grew. You see, Giesswein also sold his product online, and he made one of the only garments that boomed in the months of working from home: slippers.

Click here for more from the world of retail!

“With the demand for online shopping, what we lost was more than compensated for. Garments in general were lacking in demand, but comfortable, leisure slippers tripled their numbers. We can’t keep up with the demand!”

At the start of 2020, Giesswein had 30 people in the warehouse picking and packing products by hand, and handling around 5,000 pieces per day. There was no space to employ more people but the company needed to expand. The company makes many kinds of shoes, including trainers with traditional wool.

“We found an innovative solution from Norway,” he told us. The AutoStore system rethinks the warehouse with no space-consuming aisles. Instead, the products are placed in a 3D array of bins, using almost the whole height of the building. Cube-shaped robots trundle on a giant grid above the bins, picking up products and taking them to despatch, where humans seal them into pre-addressed shipping packages.

“After installation, we now have five people doing the picking, and we can do 20,000 pieces per day.” The new automatic warehouse was installed in the same building, alongside the old one - a move that was possible because the AutoStore system only needs one-quarter of the space.

Despite the pandemic, the installation took six months as planned: “We signed the contract in January 2020 and went live on 1 July 2020.”

The changeover had to happen as a “big bang” said Giesswein: “We did it the hardest, the most risky way. Because of our ERP system, we had to shift overnight, It was a full risk operation - a hard switch. At a certain time on 1 July, we had to import all the goods from the manual system to the new warehouse. We have 8,000 SKUs (stock keeping units or specific product variations) and we needed all those SKUs available to fulfill orders.”

The first day after the switch, the warehouse only handled 500 pieces, Giesswein told us: “Then it doubled every day till it reached 20,000. There were some IT problems, and it took us about two to three months to have a fully stable system, but the output was good after two weeks.”

The old system had an error rate of 1.5 percent, but the new one has brought that down to less than 0.2 percent. 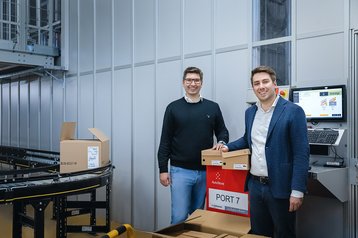 The change in business was immense. “We were 50 percent online before last year,” said Giesswein. “Now it’s 80 percent.” With that change came increasing expectations. “When you do B2B, you can deliver in a day or a week, but when a consumer order comes in before 12, we must deliver the next day. People want quick delivery.”

Giesswein now has a retail store on site, with a big window so customers can see robots fetching their purchases. All the products are made in Austria, using modern technology to work in traditional ways.

The company has also expanded its international business. Ninety percent of its sales are online orders outside Austria, with the US alone making up the same volume as to the rest of the EU.

What happened to the 25 people no longer working in the warehouse? “No one left the company,” said Giesswein. “The costs for picking and packing halved, but output rose so dramatically, we didn’t need to lay off everyone. Everyone has a different job now.”

The shift to online retail means more staff are needed, in handling customers: “Automation doesn’t have to be negative - the jobs created are higher value. Now, staff are more satisfied and we have less staff turnover.”