Switch has announced plans to make security robots for data centers in 2021, which it will use itself, and sell to enterprises including other data center companies.

The 250lb device includes 360-degree cameras, heat sensors to scan visitors' temperature and check for coronavirus symptoms, number-plate recognition for cars in the facility car park, and continuous monitoring from a Switch facility. The product was announced by Switch president Thomas Morton in an earnings call last week. 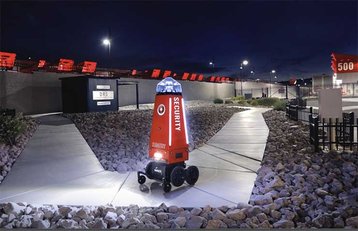 “One of the concerns regarding edge deployment is physical security,” said Switch President Thomas Morton, as first reported by Data Center Frontier. “Deploying 24x7x365 human guards at edge locations isn’t economically or physically practical. To address this issue [Switch founder and CEO] Rob Roy has developed a robotic AI human-in-the-loop security solution. In addition to the use at our own data center facilities, the excitement generated from these enterprise alpha test client partners has led to Switch offering the Switch Sentry Robot as a stand-alone security platform to the general market.”

Switch has had some involvement in the field of robotics for a while, as a co-sponsor of the FIRST Robotics competition created by Segway creator Dean Kamen.

The robots arrangement of wheels, designed for climbing curbs and stairs, has some resemblance to a delivery robot developed by FedEx with Kamen last year, as well as Kamen's stair-climbing wheelchair. FedEx is also a co-sponsor of FIRST, and a Switch customer. Switch also designed an 'Innevation Center' in Nevada in collaboration with the University of Nevada which is home to the Nevada Advanced Autonomous Systems Innevation Center (NAASIC).

When needed, the robot will be controlled by human controllers based at two of Switch's data centers, using Switch Sight, a system developed for controlling security drones.

Details, including a brochure and a video, are published on a new "Robotics" tab on the Switch site