Joining the cavern club; building a data center in a Sardinian mine 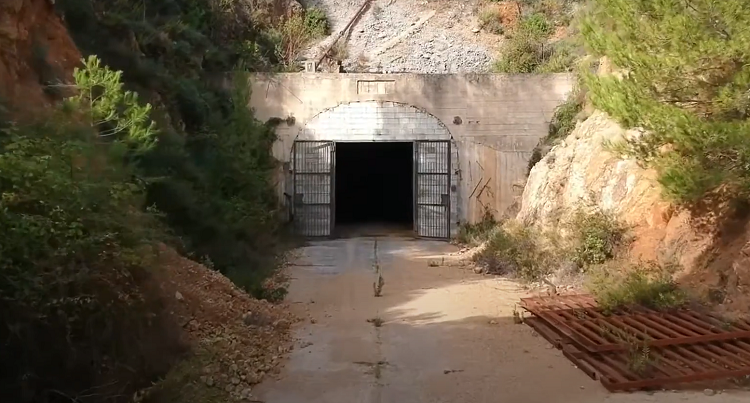 What have the Romans ever done for us? Well, apart from the sanitation, medicine, education, wine, public order, irrigation, roads, the fresh-water system, and public health, they also made southwest Sardinia a mining region that today looks set to become the home for a new underground data center in the Mediterranean.

Like Lefdal mine in Norway, Dauvea hopes to establish a new Tier III/IV data center in a disused mine; one that runs on renewable energy and uses the mine’s naturally cool air and water in lieu of traditional cooling equipment. DCD speaks to Dauvea’s executives about the Digital Metalla project.

Digital Metalla; a data center in a Sardinian mine

Antonio Pittalis and Salvatore Pulvirenti, founders and managing directors at Italian ICT firm Dauvea, have careers going back almost 30 years through Tiscali and Telecom Italia, CRS4 (Center for Advanced Studies, Research, and Development in Sardinia), and Engineering D-HUB. Founded in 2017, Cagliari-based Dauvea provides a number of IT, cybersecurity. and cloud services.

With the new Digital Metalla project, the pair aim to convert a disused government-owned silver mine into a data center. The mine, located near a town called Iglesias to the southwest of the main island in an area broadly known as Sulcis, was closed around 2000, but the area has been a mining hub since Roman times.

Metalla is an archaeological site in the ancient Phoenician city of Sulci (or Sulcis), to the north of Sant'Antioco; the small island southwest of Sardinia's main island. The area has been mined for lead, silver, zinc, coal, and other minerals for thousands of years, and mines in the area only began to close in the 1990s. The area has previously been submitted for consideration as a UNESCO World Heritage site.

“Metalla is a Latin word for mining,” explains Pulvirenti. “We tried to combine the old and the new.”

As well as having two independent fiber loops in the area, the company will use two naturally-cooled 200m deep lakes within the mine for equipment cooling using a heat exchanger.

“The site contains several hundred million square cubic meters of water, a huge amount of water,” says Pulvirenti. “The air and water inside the site is 15 degrees Celsius – which is very low compared with the average temperature in Sardinia which is around 35 degrees Celcius in summer – and it is at the same temperature all year round.”

Across two data rooms the company aims to install data hall modules in phases up to around 2MW, though there could be potential to reach 4MW. The company would power the facility via an on-site solar farm and is exploring the possibility of including a hydrogen generation plant.

Dauvea began exploring the possibility of a data center in the area around 2017/18, and in 2019 the local government began the process of offering the mine site out for tender for potential commercial uses. The tender process finished in 2020, with Dauvea granted rights to the facility for 25 years, and the pair spent another year gathering the necessary permits and authorizations to allow the project to go ahead.

Dauvea is what Pulvirenti describes as ‘infrastructure-light’ in terms of its own data center footprint – it offers services from colocation and cloud facilities – but the two have been involved in a number of data center projects in previous roles.

Pulvirenti acknowledges that hyperscalers are unlikely to be interested in such a small project. But it will host Dauvea’s infrastructure, offer colocation space to local government and businesses, and also provide disaster recovery services and potentially a digital cavern or vault for storing cryptocurrency assets.

“The data center as you can understand is not a hyperscale data center, it’s not big enough to be that,” says Pulvirenti. “But we believe that more and more that Edge data centers are needed to provide new kinds of services to the population and businesses.

“We believe that there are multiple business use cases. It’s very well-protected, and an ideal place for storing important digital assets; apart from a traditional data center it could be really sold as a digital cavern.”

Like Lefdal Mine, Dauvea hopes to attract HPC customers focused on keeping their operations as sustainable as possible. He also thinks the location would be potentially useful for quantum computing. “Quantum computing infrastructure needs to be in a place where you do not have any kind of interference,” says Pulvirenti. “The only way to get zero interference is being inside a mountain or mine.”

Dauvea is self-funded by Pittalis & Pulvirenti; the two aim to set Digital Metalla up as a separate company that will own and operate the facility in order to draw the necessary funding – the pair are targeting EU grants & funds as well as private investment – and open up more partnership opportunities.

The company estimates phase one of the project, to deliver the initial 500kW along with the infrastructure and equipment that will enable further expansion, will cost around €10 million ($11.3m). To get to 1MW the company is projecting a required investment of around €15-17 million (~$17-19m). “We have in touch with several funds, including innovation funds and especially funds related to energy efficiency,” says Pulvirenti. The company hopes to have the required funding to begin the project in 2022 and deliver the first 500kW module around 12 months later. 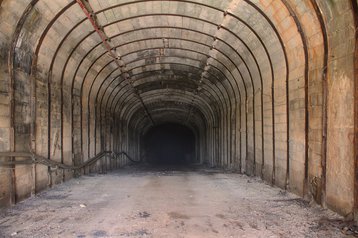 Converting a mine into a data center

The entrance of the mine is due to be enlarged and have added security measures installed. While there is fiber and power in the area, Pittalis says currently there is ‘nothing’ in the mine itself and the company will have to build all the necessary infrastructure from scratch.

From the entrance, there is a 600m (2,000 ft) long gallery. Two rooms – the planned data halls – branch from the main path and currently measure around 300 square meters (3,200 sq ft) each. The company aims to expand the size of these rooms further. “We are working with the University of Cagliari’s engineering faculty to set up the right amount of dynamite to use inside the cave to enlarge the rooms,” says Pittalis.

The data center infrastructure will be 500kW Schneider Electric data center modules. At the end of the 600m tunnel are the two lakes. Once the first data hall is installed, water will be pumped from one lake through a heat exchanger, passed through the data halls to cool the equipment, and then released into the second lake. “We are taking water from the left-hand side and we put the water after passing the heat exchanger in the other side,” says Pulvirenti. “The idea is to take the water at 15C from one lake and discharge it at 20C on the other one.”

The two lakes are connected, but only join around 200m down, so the water drawn from the ‘cold water’ side will remain at the required temperature. Thanks to this cooling approach Dauvea is targeting a PUE of less than 1.1; around 1.05 or lower. As well as the usual data center infrastructure and equipment, the company is required to build a safety corridor within the mineshaft that staff can use in an emergency. 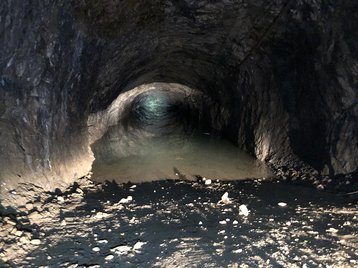 Sustainability and giving back

The project will be connected to the local power grid, but will be aiming to generate most of its power from an on-site solar farm.

The company is also looking to install a hydrogen generation plant at the site that will be powered by the excess capacity from the solar farm and be used to power on-site batteries/fuel cells. Excess power will be given to the local power grid.

Dauvea is in discussions with potential partners for that part of the project. Pulvirenti is from the Sulcis area and both men have lived and worked on the island for more than 20 years. For them, the project is also about giving back to their home.

“Whenever we talk about this project to anyone, government or private, we see a lot of enthusiasm,” says Pittalis. “The local government in the town of the site are enthusiastic.”