As the terrible reality of anthropogenic climate change becomes apparent, data center providers and their customers have sought to embrace renewable energy to power their facilities. Outside of moral concerns, renewable energy contracts can also often provide more stable prices than fossil fuels.

There’s just one problem: Utilities generally don’t want to help. Across several panels and presentations at this year’s DCD>San Francisco, the colo and cloud industry grappled with this dilemma: How do you go green when the grid stays brown? 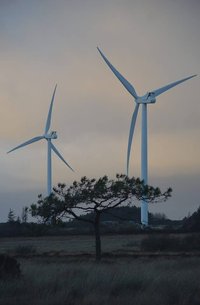 All about that green

“We're the largest corporate buyer of renewable energy in history,” Google’s senior director of data center energy and location strategy, Gary Demasi, said (and it's a claim the company has been making since 2015).

Google currently buys renewable power via Power Purchase Agreements, preferably locally where possible - but sometimes is simply unable to buy that power close to the facility.

“I mean, you're dealing with utility models that have been in place for a very long time,” Demasi said. “Sometimes you're challenging the actual business model itself - that's been a significant challenge for us and our journey since 2010, trying to get our utility partners to actually incorporate renewables into their plan in a way that works and doesn't impact their other customers and all these sensitivities.”

As one of the largest voices in energy purchasing, Google has had success, in deals with US utilities: “I think it’s working - we've been successful, we've done deals with Duke Energy, with Southern Company we just did a 400+MW deal with TVA all for renewable energy supply in grids where we operate large data centers.

“Those are really tough counter parties, they're very powerful entities in the geographies in which they operate.”

Going up against such entities hasn’t always been easy. “In 2010, we began trying to work with our local utility in Nevada, at the time, to achieve 100 percent renewable energy,” Adam Kramer, Switch's EVP of strategy, said. “That proved very difficult for us.”

“They didn't want to provide us with an opportunity for 100 percent renewable energy.” What followed was an epic legal fight between Switch (along with casinos, Tesla and other businesses) and NV Energy, spanning several years and spilling into the public sphere - with each side pumping money into lobbyists, PACs (some of which DCD detailed here), and publicity campaigns.

“We launched the largest ballot initiative in the state's history to create open access energy in the state,” Kramer said. “It was a $100 million dollar campaign with Warren Buffett's utility [Berkshire Hathaway is the parent company of NV Energy] spending $70 million to try and stop direct access for consumers.”

Switch became the first major Nevada company to leave the utility’s service in 2016, paying nearly $30m for the right to do so, and in 2018 Switch bought $34.8 million in renewable energy credits from the utility.

He noted: “We've been working with utilities - outside of NV Energy - quite well on not just giving us access to renewable energy, but giving it to us at an affordable cost.

“If we're going to come and create new load into a market, why would I be straddled with the existing utility costs? I'm willing to as a company absorb a 20 year PPA and take the power and take all that risk, so it's not shared with any other consumers. It's purely mine. But I'm willing to come there and do that. And some utilities are starting to see that.” 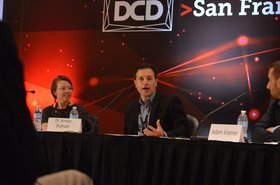 We can’t fix what we don’t understand

The market has begun to shift, albeit slowly, panelists agreed. But then there’s Dominion.

As the main utility serving Virginia, home to the preponderance of data centers, its power is what fuels the Internet. Unfortunately, it’s the wrong kind of fuel.

In a highly unusual rebuke of Dominion’s energy strategy, which it hopes will rely on the controversial Atlantic Coast Pipeline, data center operators penned an open letter demanding a better renewable energy strategy.

"It isn't in Dominion's DNA to be slapped around by their customers," Travis Wright, QTS’ VP of energy and sustainability, said. "They're a very big, powerful entity. And they have a lot of big lobbyists out there that make sure that they get to do things the way they like to do things. And that's sort of the way it's been."

The letter - written by companies that Greenpeace estimates represent over 50 percent of the more than 4GW of data center electricity demand projected in Virginia - proved more successful than expected, Wright said. "This got a lot more attention than we thought it would.

"And I personally have had meetings with their head of renewables within the last week that have been a very different tone. This is the exact kind of thing that helps that momentum move forward to change where we need it to change. It didn't take a lot to sign on to this. And that kind of very small, very small effort makes this big change, not just for us, but for everybody. And so I think that's where we move forward here." 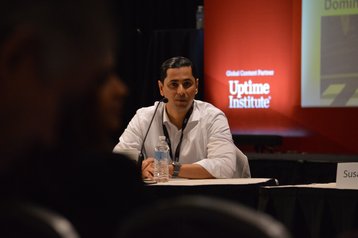 All for one, and one for all

Collective action can reap rewards, attendees agreed. Speaking at a later session, Google’s Demasi said he had “been struck by the common interests that we have here this week, in terms of the ability to aggregate our buying power between colocation providers and the large hyperscalers like Google, there's this incredible opportunity to aggregate our buying power and to amplify our voice.“

But, Demasi admitted, data center companies still can’t turn down locations simply because the grid there is unclean. “We have business reasons to have to grow locations when we need to grow them, right? Our job is to provide capacity for a slew of internal customers - we need capacity in particular places at a particular time.”

This is why the company came to Taiwan, Demasi said: “We have to be in Asia to serve our users there.” But Taiwan’s grid is decidedly brown, with Google making up for the fossil fuel-based energy used to run its data center since 2013 with renewable investments elsewhere.

Then, early this year, change started to happen, with Google signing a deal to buy the output of a 10MW solar array in Tainan City - not enough to cover the data center’s needs, but a start. “That took three years,” Demasi said. “It literally took a meeting with the President of Taiwan to get that done. And so we have to work hard at this to influence this kind of change.”

Now is the time to try to make that change, Avant Energy’s COO Oncu Er warned - not just because the clock is ticking on reducing emissions, but soon utilities will have other customers to worry about.

"Utilities have had anemic growth for a long time, and they want data centers," Er said. "There is a change in the energy industry, where you are seeing utilities more open to having these conversations, but it is true that there is inertia, and it is really hard to overcome these business models that have been in place for a long, long time."

But utilities’ desire to bend to the whims of data center customers may prove fleeting: “I think there’s this opportunity for data centers and utilities to work and collaborate closely, it’s maybe 5-7 years.”

Then comes a much bigger challenge for utilities to deal with: Electric vehicles. “If EV penetration ends up being what the forecasts say they are going to be, then the utilities can only focus on so much. There's huge transmission and distribution investments that have to be made between now and 2030/40 in order to simply handle the amount of EV load in neighborhoods.”

With just 25 percent penetration, the grid will already require significant investment to handle EV chargers. “Utilities have their eyes on all that stuff,” Er said.

“So there is a time and the time is right now for having these conversations with your utilities.”