Are banks ditching their data centers?

Or are they not quite ready to let go?

Outside of a Barclays bank in Enfield, North London, a crowd has gathered to witness the unveiling of the world’s first Automated Teller Machine (ATM). Despite the 27°C (81°F) heat, the assembled officials wore traditional suits and ties - but there was a sense that something was changing.

The introduction of the ATM was a huge technological leap for what had been a relatively static sector. But by the 1960s the seeds of digitization had been sown in the banking world.

Banks already used mainframes, and these developed into data centers during the later decades of the 20th century, enabling new ways for customers to contact their bank.

In 1989, Midland Bank launched First Direct, a branchless bank operating through call centers. Other banks and financial services such as Smile and Egg encouraged banking at a distance by phone and online. By 2001, Bank of America reported that three million of its customers used online banking.

When change came for the banks

But all of this was gradual change. It’s only recently that things have sped up - and the 2008 financial crisis was a major catalyst. It’s possible that the 2008 crash will be seen as the real beginning of the end for in-house data centers at banks.

In the recession that followed the crash, banks lost the trust of the general public.

Perhaps in response, they began to work more closely with FinTech companies on new approaches. Online banking had arrived, and mobile banking was available - increasingly capable smartphones put the two together so people could handle money on the move without branch visits.

Meanwhile, FinTech companies had new tools, and began to promise that AI and the ubiquity and speed of mobile networks would allow them to dramatically advance the culture of convenience and immediacy. For the banks’ part, they were struggling to see how that convenience could be delivered.

In the wake of the financial crisis, regulations were adding additional hurdles, increasing their workloads and the complexity of functioning in an attempt to reduce risk.

This set of pressures forced banks to rethink a lot of things. They welcomed in FinTech companies and moved faster in offering more flexible services 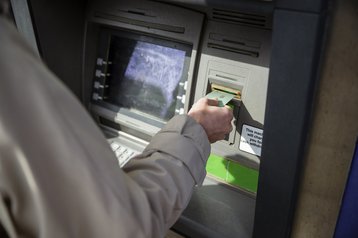 They also dug back inside their own infrastructure, and questioned whether their internal digital infrastructure was up to the job.

The on-premise data center began to look like a liability, rather than an asset. Banks moved their servers from their own back offices into shared spaces such as colocation data centers. But the next step - moving to a cloud-based infrastructure running on shared machines in a centralized data center - could still seem more risky.

“If you have followed financial industries’ data centers, I would say going back even as recently as 10 years ago, a financial services company embracing colo or cloud would have been viewed as highly unlikely,” Marcus Hassen, a group manager from the US financial holding company Truist said, in a recent DCD panel.

For Hassen, the rate of change is impressive, given banks’ conservatism and the recent development of the cloud. Online applications didn’t start much before Salesforce.com, and the public cloud didn’t take off until Amazon got serious about offering Amazon Web Services.

“Public cloud has only even been a segment since around 2006 when Jeff Bezos wanted to find ways to diversify,” said Hassen. “You have to hand it to the hyperscalers for the way they've been able to sell many CTOs and CIOs on the cloud being the superior business model.”

Ten years on from the financial crash, we had the cataclysmic incident of a global pandemic, which hastened digitization in many ways.

During the pandemic those of us with jobs that could be done from home were forced to huddle indoors. This led to a boom in the data center industry - but a boom primarily reflected in spending on cloud-based services, not on on-premises systems.

How are data center requirements for the financial sector changing and what’s driving this?

Following the pandemic, it’s clear that all sectors, not just banking, are shifting resources towards the cloud, and away from on-premises facilities.

Ali Moinuddin from Uptime Institute spoke of this transition: “Over the last few years, what we've seen is that more and more organizations are being much smarter about how they are deploying their IT assets, and which venues they are using.

“They often have a multi-cloud, multi-colo service partner, and they are also running their own data center. They've transformed their own infrastructure, which they were planning to do before the financial crisis. But after the financial crisis, many of those were taken off the balance sheet. And hence, we've seen a significant increase in the use of cloud infrastructure and more importantly, colocation service providers.”

The future is hybrid

This being said, on-premises IT is not (yet) dead. There is a good reason why banks are moving into hybrid - keeping their own on-premise infrastructure alive alongside new applications in the cloud.

That reason is risk. It turns out that using multiple cloud providers can create a smokescreen behind which single points of failure may hide.

“There are some concerns around the risks associated with concentration, whereby certain significant service providers could be hosting a number of financial institutions which are critical to a domestic economy in a specific region in the same availability zone. So if there was an outage event, it wouldn't just be one bank that is impacted, it would be several banks, which would have an actual very specific, and very negative impact on the reputation of the financial services sector.”

In February this year, five banks simultaneously went down in Canada, leaving customers unable to use online or mobile banking, or use their debit cards. There was no explanation given as to the sudden outage.

Another impact of the pandemic was a move away from using cash.

Half a century on from that first cash machine, we are starting to move towards a cashless society. During the pandemic, many shops accepted only card payments to limit physical contact as much as possible, and in 2020 cash payments reduced by 35 percent. Since the pandemic, things have not really bounced back.

The unforeseen consequence of this is an increased dependence on those online systems. Hard cash is something that can be reliably carried and used, whether or not we have online access to working digital banks. Mobile banking debit cards and credit cards all rely to a greater or lesser extent on online services.

In this world, when services fail people can be left extremely vulnerable. It is essential that banks protect themselves and their customers against this risk. When banks assess the relative reliability of the cloud and on-premises IT, they must be aware that the stakes are getting higher.

In this situation, it can be tempting to keep IT on-site and under your control. Charles Hoop, global lead IT sourcing and category management at Aon told DCD that: “a lot of this is philosophical, religious almost, in terms of some of the biases that drive it[desire to stay on-prem].”

“As things have been outsourced, it's all third party. I don't know that there are many electrical engineers on staff who can read a single line and actually spot that single point of failure.”

But Hoop believes that increased control is not enough to justify the cost of on-premise systems compared with the cloud: “I think if you just looked at the dollars and cents, the technical cost benefits, I can't see why you'd be building your own facility.”

The real cost of on-prem

Of course, building your own facility from scratch would trigger a lot of additional costs. But in the banking sector, we are often not talking about building new data centers, but upgrading within an already functioning on-premise facility, or moving resources from that facility to colocation or cloud.

This kind of process is in itself costly, but it can ultimately save money in the long run, if it is done right.

The real solution comes from planning and understanding what data and computing need to be in the cloud and what should remain behind.

Given all that, Ali Moinuddin argues that the true future is in hybrid.

The search for control over hybrid IT spend

“We are seeing a steady migration from legacy enterprise assets into both public and private cloud, and colocation. As we [Uptime Institute] have been developing our Financial Services Assessment, about 50 percent of the banks have told us that currently, they have a no public cloud policy. These were global banks from across the world.

“However, they are building private clouds within colocation, and their own enterprise data centers.”

In January 2022, it was announced that JPMorgan had done just this: built its own data centers for hosting private clouds. The company spent $2bn on new data centers in 2021 despite having an overall strategy to get IT into the cloud. The spend was met with criticism, and even a drop in share prices, but the company stated that the investment was necessary in order to provide data centers and cloud services in new markets like the UK.

"We spent $2 billion on brand-new data centers, which have all the cloud capability you can have in private data centers," chief executive Jaimie Dimon told analysts on a call.

"All the stuff going to these new data centers, which is now completely up and running, is on apps. Most of the applications that go in have to be cloud-eligible. Most of the data that goes in has to be cloud eligible."

This is still part of a long-term plan to become fully cloud-operated. But Moinuddin argues that: “We’ve seen some financial services, as they scale their requirement in the cloud, realize that not everything needs to be in the cloud and they start to repatriate some of the data and services that were being outsourced.”

“When we started looking at if we could move this application that we've had for many years into the cloud, it may not be cloud-friendly, and it may not work properly, and then you have to ask what is it going to cost to do that? You never really reclaim the RTI [research technology and innovation].

“But there's definitely hybrid IT coming into play and it should for a couple of reasons. Way back in the day, if a data center was bursting at the seams, we would need to build a new data center or we would have to pack up and move everything. But as you start moving your loads into the cloud, you can maintain that data center and probably have it razor-sharp in the sense that it's only the critical application processing that sits there.”

While several banks, including Barclays and Natwest, have welcomed cloud computing with open arms and are looking to move entirely to the private cloud, banking as a whole seems currently unwilling or unable to fully leave enterprise data centers behind.

On-premise computing does still offer solutions to the most critical and secure data, a reluctance to move towards a hybrid IT architecture could render traditional banks unable to keep up with the newer FinTechs who embrace the changes and trends in the industry, and lose out financially in the long run.

All tech has a life cycle

While the ATM was a great advance, it has peaked. Cash machines are being removed from the walls in many sites as people use less cash. At the same time, the data centers which backed that generation of banking have also passed their peak, with fewer being built, and many of the old ones closing.

But it’s not the end of the line for on-premises data centers just yet. They aren’t dying out, they just need to find a new role.